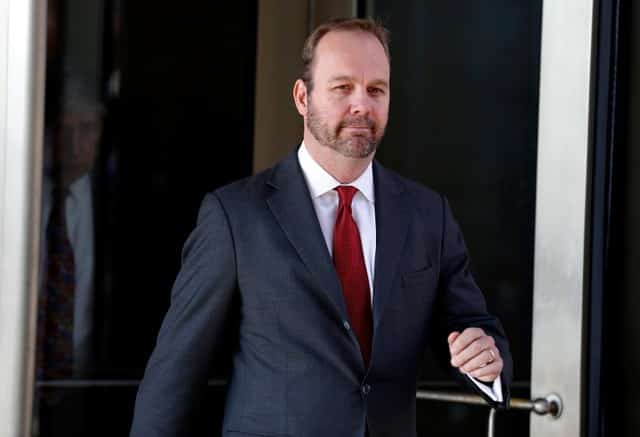 Rick Gates, former campaign aide to US President Donald Trump, departs after a bond hearing at US District Court in Washington

Rick Gates, a former adviser to Donald Trump‘s 2016 presidential campaign, was expected to plead guilty as soon as Friday in a federal investigation into Russia’s role in the election, the New York Times reported, a sign that he will likely cooperate in the probe.

A guilty plea by Gates could add pressure on Gates’ former business partner Paul Manafort also to seek a plea deal. Manafort, who ran Trump‘s campaign for part of 2016, has also been charged in Special Counsel Robert Mueller’s probe.

Cooperation by the two could potentially provide a rich vein of information for Mueller, who is investigating whether Trump‘s campaign colluded with Moscow’s alleged meddling.

Mueller indicted Gates and Manafort in October on counts that include conspiracy to launder money and failing to disclose lobbying work for a pro-Russian political party in Ukraine. He filed new criminal charges against the pair on Thursday. Until now, both have maintained their innocence

ABC News and the Washington Post also reported on Friday that Gates was expected to plead guilty, without giving a date. The Times and ABC sourced their reports to unidentified people familiar with Gates’ plea agreement. Plea deals often involve promises to cooperate with an investigation in exchange for more lenient sentences.

Mueller’s office could not be reached for comment. A lawyer for Gates did not respond to requests for comment.

When Manafort became manager of the Trump campaign in the middle of 2016 Gates served as his deputy. Gates helped run the campaign’s day-to-day operations, played a key role at the Republican National Convention at which Trump was chosen as the party’s nominee and accompanied Trump on campaign flights.

Gates, a longtime protege of Manafort, was actively involved in a campaign to boost the image and fortunes of Viktor Yanukovych, the pro-Kremlin former president of Ukraine.

That work brought in $17 million for Manafort’s lobbying firm between 2012 and 2014, payments that were not disclosed until last year after Mueller’s probe into their business was well underway.

None of the charges against Gates or Manafort make reference to any connection with Russian interference in the 2016 election or collusion between Moscow and Trump’s campaign.

Mueller, appointed by the Department of Justice last year to investigate Russia’s role in the election and possible collusion by the Trump campaign, has a broad brief that allows him to look into any wrongdoing uncovered in the course of his probe, including possible obstruction of justice.

Moscow has repeatedly denied it sought to meddle in the campaign to tilt the vote in favor of the Republican candidate, Trump. Trump has denied any collusion by his campaign, and any attempt to obstruct Mueller’s probe.