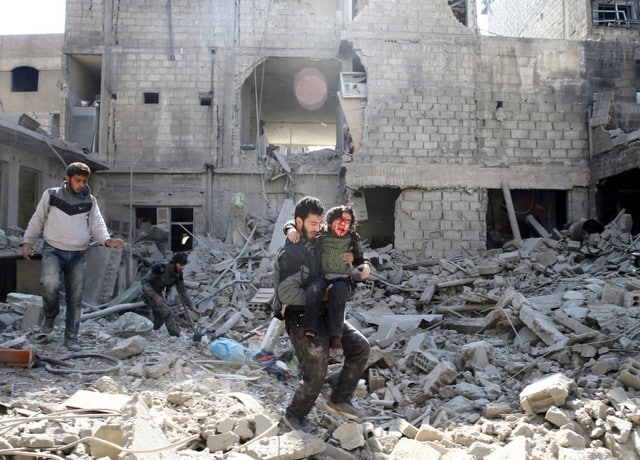 A man carries an injured boy as he walks on rubble of damaged buildings in the rebel held besieged town of Hamouriyeh, eastern Ghouta, near Damascus, Syria

The two European Union leaders appealed to Putin — whose military intervention in Syria gave President Bashar al-Assad the upper hand in the seven-year-old conflict — to stop bombardments of the rebel-held pocket of eastern Ghouta.

Warplanes from Assad’s government forces and their allies pounded the densely populated enclave east of the capital Damascus for a sixth straight day on Friday.

“France and Germany call for an immediate cessation of hostilities and the implementation of a ceasefire to provide civilian support, humanitarian access and medical evacuation, as called for by the UN,” the two governments said.

“France and Germany call on Russia to shoulder its responsibilities in this regard,” they said in a joint statement as Macron and Merkel met other EU leaders for talks in Brussels.

He urged them to stop the violence. The EU called for an immediate ceasefire, urgent humanitarian access to and protection of civilians, he said.

Diplomatic sources told Reuters Merkel and Macron – who both said they hoped the ceasefire would be agreed – were also due to call Putin together after the vote in New York, which had been delayed.

Moscow, which has the power to veto UN Security Council resolutions, has often in the past blocked texts that would be damaging to Assad. Russia said on Friday it was ready to support the draft resolution, but with caveats.

“There are no guarantees that (the rebels) will not continue shooting at Damascus residential areas,” Russian Foreign Minister Sergei Lavrov said in a briefing.

The EU as a whole has only played a marginal role in the international diplomacy around the conflict in Syria, where the multi-sided war has killed hundreads of thousands and driven millions from their homes.

The bloc is trying to leverage its role as the world’s top aid donor to woo Assad back into the stalled UN peace talks, which have achieved little over the years.

The talks are now deadlocked as Damascus, Moscow and their other ally Tehran attempt a final push to re-establish Assad’s rule.