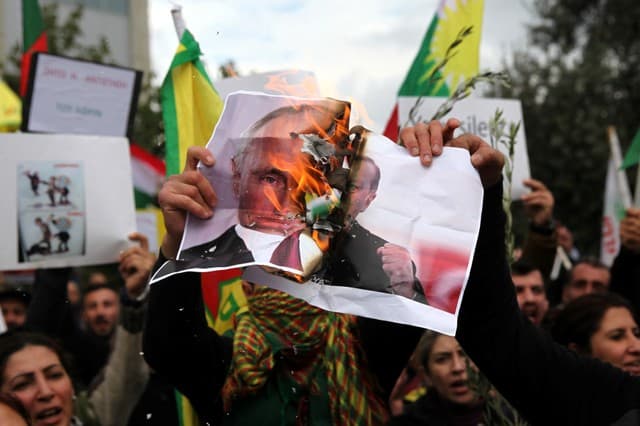 Kurds living in Cyprus burn posters depicting of Russian President Vladimir Putin and Turkish President Tayyip Erdogan during a demonstration against the Turkish offensive on Kurdish forces in north-west Syria, outside the American Embassy in Nicosia

The Turkish army struck a convoy entering Syria’s Kurdish-held Afrin region, which Ankara said carried fighters and weapons but Kurdish forces said was made up of civilians entering with food and medicine.

In a statement on Friday, the Turkish military said a fleet of some 30-40 vehicles of the Syrian Kurdish YPG militia had approached the main town of the north-west Afrin region. It said artillery targeted the convoy “carrying terrorists, weapons and ammunition”.

The YPG said the convoy, which arrived in Afrin late on Thursday, had transported civilians from the Jazeera region further east and other towns under the control of Kurdish forces.

Birusk Hasaka, the YPG spokesman in Afrin, said the convoy included hundreds of people. The shelling set some cars ablaze, wounding at least ten people and killing one passenger.

“The convoy was headed to stand in solidarity with the people of Afrin, carrying food aid and medical supplies,” he told Reuters.

Turkey launched an assault last month on Afrin, seeking to drive out the YPG which it deems a menace along its border. It denies hitting civilians during the offensive.

“As always all attention and sensitivity was shown so that civilians were not harmed,” the Turkish military said on Friday. It released aerial video footage showing a series of explosions and smoke rising from a country road.

President Tayyip Erdogan said on Friday the Turkish army was making every effort to avoid harming any civilians, which was extending the duration of the operation. Defence Minister Nurettin Canikli has previously dismissed reports of harmed civilians as false.

Human Rights Watch said on Friday it had investigated three attacks in Afrin last month in which Turkish troops failed to prevent civilian casualties. The air strikes and shelling, on a cluster of tents, a poultry farm, and a house, killed 26 civilians, including 17 children, it said.

“It appears that vulnerable civilians are facing displacement and death because of the way Turkey‘s latest offensive is being conducted,” said Lama Fakih, deputy Middle East director at the US-based group.

Since the onset of Syria’s conflict in 2011, the YPG and its allies have carved out three autonomous cantons in the north. Their territory expanded as they defeated Islamic State with US help, although Washington opposes their autonomy plans, as does the Syrian government.

This week, militias allied to Damascus deployed to Afrin to help fight the Turkish assault. The Damascus government has also been allowing Kurdish fighters, civilians, and politicians to pass through its terrority to reach Afrin in recent weeks.

A YPG statement accused Turkey of trying to “create a state of terror and force people towards mass displacement” with air strikes and arbitrary shelling in Afrin.

Ankara sees the YPG as an extension of the banned Kurdish PKK movement, which has waged a decades-long insurgency on Turkish soil.