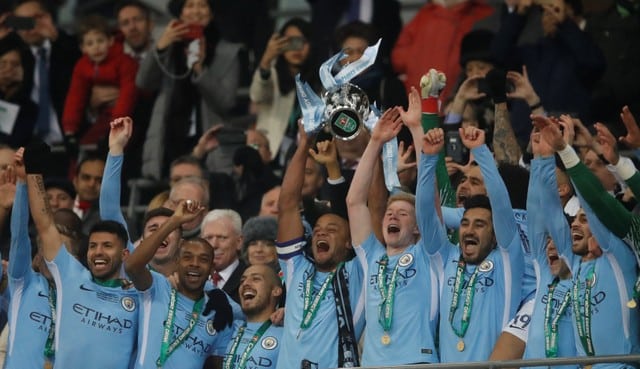 Pep Guardiola claimed his maiden English silverware as goals by Sergio Aguero, Vincent Kompany and David Silva gave his Manchester City side an easy 3-0 victory over Arsenal in the League Cup final on Sunday.

The first ever domestic final clash between the sides was a largely disappointing affair at a freezing Wembley Stadium but runaway Premier League leaders City had far too much for an Arsenal side who suffered a forgettable afternoon.

Aguero’s 18th-minute goal gave City a halftime lead and Arsenal withered after the break as Kompany prodded in from close range after 58 minutes before Silva effectively ended the contest seven minutes later with a left-foot finish.

After a trophy-less first season in charge of City, Guardiola’s career trophy haul as a manager now stands at 19, having won 11 with Barcelona and seven at Bayern Munich.

Arsenal have now lost a record six League Cup finals while City have won it three times in five years.

Letymbou pushing its way on to the visitor map