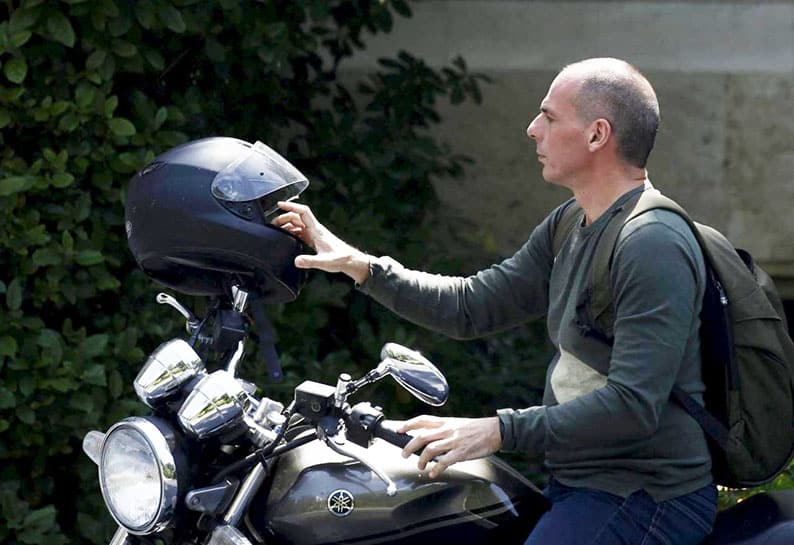 That title belongs to the Eurogroup, a relatively new organisation scarcely mentioned in any EU Treaty. The Lisbon Treaty in 2009 briefly mentions it only as an “informal” group.

Despite the fact that it does not have a democratic basis, is without any assigned legal powers, and accountable to no-one, the Eurogroup has proven its ability to shake governments, dictate to parliaments and impoverish entire populations.

Its membership has normally comprised of the European Central Bank (ECB) the IMF, the Vice President of the EU Commission – these three collectively known as the “troika” – plus the finance ministers of the various Eurozone member states and the president.

Its decision making and deliberations are the most opaque and secretive of any EU governing body. Yiannis Varoufakis’ struggles with the Eurogroup turn about the pressures on him as a newly elected Greek Finance Minister to agree to the conditions of the second Greek bail-out as signed by the previous Greek government.

His position throughout these negotiations was that the Greek bail-outs had not worked and were based on a failed recipe. He argued strongly and consistently that for Greece to remain viable a debt restructuring was required that would reduce Greek annual payments to its debtors.

The many references and quotations in the book draw on his first-hand experience, also his notes, mobile phone recordings and documents. First contacts as finance minister in the new Greek Syriza government, Varoufakis’ first move was to visit his new offices where he found several hundred cleaning ladies who had been declared redundant by the troika.

Rehiring the cleaning ladies, he proceeded next to sell the two armoured BMW’s belonging to the Greek ministry of finance for €750,000. His motorcycle was to provide his future transportation needs. Jeroen Dijsselbloem (JD) the president of the Eurogroup, lost no time in visiting Athens to meet with Varoufakis personally.

The meeting was predictably stormy. JD insisted that commitments by the previous government to the austerity programme should be honoured. Varoufakis pointed out that as a newly-elected minister and member of parliament he had had a democratic mandate from the people of Greece for change. You do not understand JD countered “the current [bailout] programme must be completed, there is nothing else”.

In the press conference which followed, Varoufakis reiterated his position against the existing bail-out programme. Jumping to his feet an angry JD said, “you just killed the troika” and stormed out. During their conversation JD “boasted” that the way Cyprus had been treated in 2013 was to serve as “template” for future crises.

A few days after his meeting with JD, Varoufakis left on a tour of European capitals to sound out the members of the Eurogroup face to face. His most important meeting was with Wolfgang Schauble, the German finance minister who “offered to send 500 German tax officials to Greece to help catch tax evaders”.

Varoufakis expressed his sympathy for catching tax cheats but the suggestion was dropped when he pointed out that they might have difficulty reading Greek tax returns. His meetings with other Eurogroup officials were similarly discouraging. Personal sympathy and apparent agreement during private discussions disappeared when it came to statements made to the press.

At his first Eurogroup meeting Varoufakis saw at one end of a long table were seated the three members of the troika – the EU, IMF and ECB. The national finance ministers of the EU occuped the remaining seats.

The meeting opened with the three troika representatives invited by the president to present their views. This provided the framework of the discussion. Afterwards the elected finance ministers are invited to comment. During the meeting, Varoufakis was informed that the briefing papers he had brought with him to distribute to the ministers were not allowed.

Eurogroup ministers received no substantial briefing on the topics discussed. He was also forbidden from e-mailing his papers to the ministers. In his opening statement, Varoufakis assured the Eurogroup that despite his parties’ left-wing leanings, it was dedicated to a united Europe but the newly-elected Greek government disagreed with the current bail-out programme.

Varoufakis proposed a new compromise agreement. While accepting many parts (70 per cent) of the current programme, he made a number of new proposals including bridge financing. The bridge financing was meant to combat the persistent threats by the European Central Bank (ECB) to cut off liquidity to Greek banks and the chaos that would follow.

Varoufakis’ term for the frequent references to cut off liquidity was “fiscal waterboarding” – like ‘waterboarding’ a form of torture which leaves no marks. Varoufakis’ proposals were greeted with enthusiasm by Michael Sapin, the French finance minister.

Sapin was rewarded with a piercing look from Schauble, the German finance minister who countered that “Greece had obligations that could not be reconsidered” and “elections cannot be allowed to change economic policy”.

Schauble’s speech received the usual welcome from countries described by Varoufakis as Schauble’s “cheerleaders”, Slovenia, Slovakia, Lithuania, Spain, Ireland, Belgium and Austria. Christine Lagarde, IMF head, made polite noises that Greece’s views had to be heard but she would not challenge Schauble. Mario Draghi, President of the ECB, “just looked unhappy”.

The President of the Eurogroup informed Varoufakis that he could not leave without agreement on the all-important press release that follows such meetings. Furthermore, the press release could not include his suggestions for amending the current bail-out arrangements, “either you accept it as is or it is all over”.

At an impasse, Varoufakis called Alexis Tsipras, the new prime minister of Greece, to inform him of the situation. Tsipras quickly rejected the Eurogroup’s proposed press release. The following day when JD, the president of the Eurogroup, visited Tsipras in his hotel, everything had changed.

Apparently German Chancellor Angela Merkel had called and instructed JD to reach an accommodation forthwith. The press release would simply say that the Greek government and the Eurogroup would discuss moving on ”in accordance with the new government’s plans”.

A small victory for Varoufakis, which was short-lived. In a private conversation with Schauble, Varoufakis once again brought up the subject of the troika’s proposed MoU outlining the bail-out agreements which he had fought so hard to change.

Schauble replied “The MOU as it is, with no changes. Or the drachma”. Schauble proposed that Greece leave the euro temporarily to recover economically and then return to the euro. Varoufakis pointed out that it would take at least a year to implement a new currency during which there would be economic chaos. His later discussions with Schauble ended on a more friendly and civilised note.

Ultimately, Varoufakis failed to persuade the Eurogroup to amend the bail-out. The ECB cut off liquidity to Greek banks which closed for a time. Tsipras replaced Varoufakis in negotiations. Despite the famous referendum in 2015 in which Greeks voted “No” to the troika’s bail-out requirements, Tsipras signed a new Greek bail-out, agreeing to even more austerity, including tax increases, reduction in pensions, privatisation etc.

As for Varoufakis’ supporters, we should also mention some of the foreign officials who supported him during the negotiations. These included among others, now French President Emmanuel Macron who was finance minister at the time, Jeff Sachs, Columbia University professor who has visited Cyprus and who provided technical, political and moral support throughout, Jean Claude Juncker, President of the EU Commission who insisted that “Greece belongs and will stay in the euro”, Norman Lamont, former British Chancellor of the Exchequer, President Barack Obama, who on chatting with Varoufakis at an informal function commented that “austerity sucks”.

Dr Jim Leontiades is Academic Dean at the Cyprus Institute for International Management.