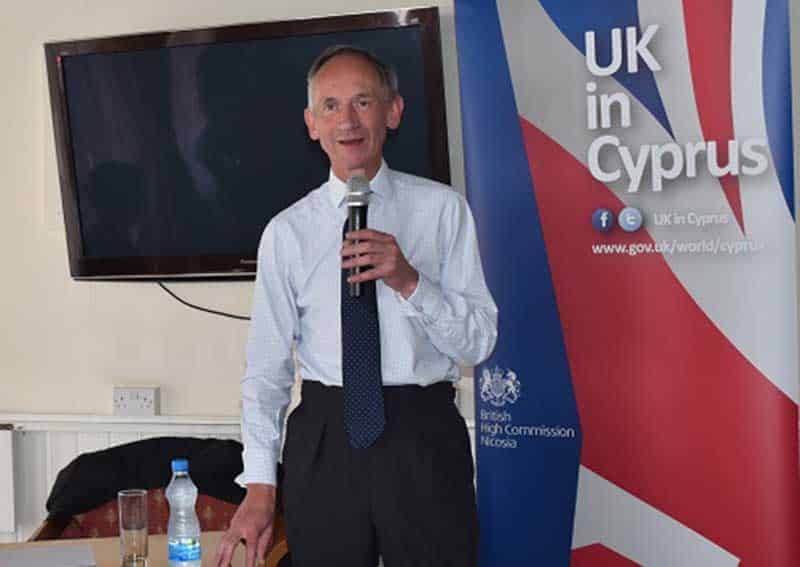 Paphos is home to the largest number of Britons on the island and the first of the meetings took place for Peyia residents, followed by a second larger one to a packed audience at the Phoenix Social club in Paphos. Similar events are also taking place in other towns.

Speaking at the event, Kidd said: “The package of finance, Irish border, and citizens’ rights (although a way to implement it has yet to be agreed), was decided in December, and it will be turned into a legal text”.

The aim is to complete it by June to give time to Britain and other EU member states to complete the ratification process in time to be in force on March 29 next year, he added.

He assured that anyone who has acquired rights to live in another EU member state will at Brexit keep those rights, and they will apply to their children even if they are born after the Brexit date.

However, British Vice Consul, Christina Smith stressed the need for British residents in Cyprus to ensure that all their paperwork is in order and added that after a five year period, MEUI forms can be converted into MEU3 forms. (Both are yellow).

She advised that residents that have been in Cyprus for over five years and meet the criteria should take all of the necessary paperwork to immigration in order to be given the MEU3 form, which is the best available option available to British residents.

She added that ARC holders with an ‘alien’ stamp in passports or alien registration books should, if they haven’t already, convert these into yellow slips (registration) at immigration and they should be able to convert this into an MEU3 straight away, as they can show that they have a history of remaining in Cyprus for a set period of time.

Kidd noted that Cyprus wants to continue to be an attractive option for people moving to the island, purchasing homes and starting up businesses.

“Cyprus is also one of only two countries that export more than 10 per cent of their goods to Britain, the other is Ireland and there are close links with the city of London’s financial operations,” he said.

The pair also answered questions from the audience on topics including health care in both Cyprus and the UK, pensions, renewal of British passports and applying for Cyprus passports.