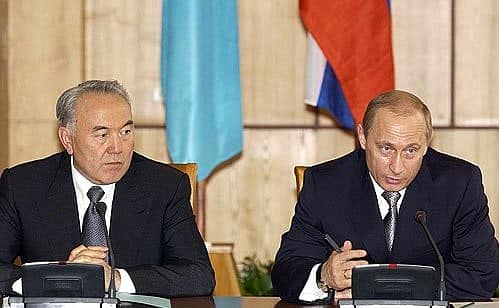 Kazakhstan further loosened cultural ties with its former political masters in Moscow on Tuesday when a ban on speaking Russian in cabinet meetings took effect – despite many ministers favouring that language over their native Kazakh.

The only Soviet-era leader still in power, the 77-year-old has run the Central Asian country since 1989. He is fluent in both languages and switches between them in his speeches.

But many Kazakhs, including some senior officials, are not, and prefer Russian, and cabinet meeting have generally been bilingual too.

But in Tuesday’s meeting, broadcast live on state television, only one participant in the chamber, Education Minister Yerlan Sagadiyev, was permitted to speak Russian. Exceptions were also made for provincial officials who joined via videolink.

After independence, many former Soviet republics rushed through the process of severing links with Moscow, known as de-Russification.

Kazakhstan, which became self-governing in 1991, took things more slowly, in part because ethnic Kazakhs at that time made up less than half of its population.

But in a census compiled in 2009, only 62 percent of the population said they were fluent in spoken and written Kazakh, compared with 85 percent in Russian.

The ethnic balance has since shifted, with Kazakhs now making up 69 percent of the oil-rich nation’s population of 18 million, while ethnic Russians account for just a fifth.

The Russian language has continued to dominate, however, generating public pressure for the government to promote Kazakh more actively.

Kazakh, a Turkic language, has very little in common with Russian save for some borrowed words.

Nazarbayev last year announced a switch to a new, Latin-based Kazakh alphabet that will gradually replace the current Cyrillic script adapted from Russian.

The move was not without hiccups. This month he amended his own decree after many Kazakhs criticised the use of apostrophes combined with Latin letters to denote some Kazakh letters. The new script uses French-style accents instead.

Nazarbayev maintains warm ties with the Kremlin and was credited with helping to mend fences between Moscow and Ankara in 2016 after they fell out over Turkey’s downing of a Russian warplane.

But there is no sign of compromise in his crusade against his officials speaking Russian.

He has also ordered all parliamentary hearings to be held in Kazakh, saying those who are not fluent must be provided with simultaneous translations.

And his ministers will get no further leeway either.

“Next time I will report (from the cabinet) 100 percent in Kazakh,” privately owned news website Informburo.kz quoted Sagadiyev as saying.

Stephen Fry back to work after revealing cancer battle