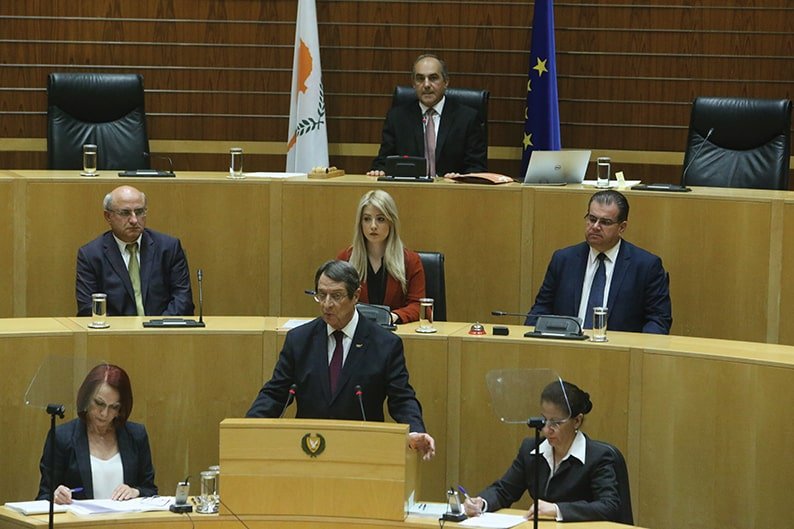 In his speech following his confirmation ceremony in parliament, where he took the oath of office, Anastasiades said Turkish actions in the exclusive economic zone worsened the island’s division.

“Unfortunately”, he added the Turkish side’s stance and their violations of international law “make the resumption of talks at least currently impossible” unless Ankara called a halt to its actions. Turkey’s violation of the island’s exclusive economic zone (EEZ) was an attempt to create a new fait accompli in Cyprus, he said.

“What really saddens me is the attitude of the leadership of our Turkish Cypriot compatriots because once again they have withdrawn from convergences achieved [in previous talks] which were confirmed by both Messrs [Demetris] Christofias and [Mehmet Ali] Talat, and also [subsequently] with [Turkish Cypriot leader Mustafa] Akinci,” said Anastasiades.

He said the convergences clearly specify that any decisions concerning maritime zones – territorial waters, continental shelves, exclusive economic zones would be the responsibility of federal reunited Cyprus. At the same time, the allocation of state revenues was also agreed for the benefit of all citizens of Cyprus and  “the Turkish Cypriots were certainly not the exception to that”.

In addition to what has been agreed, the government,  he added, had tabled a bill to the House establishing a state fund for the management of revenues from the exploitation of hydrocarbons in the standard form of the Norwegian model, international principles and best practices.

He said as for a wider foreign policy, Cyprus would continue to further deepen and strengthen relations with neighbouring countries.

The president also called for unity among Greek Cypriot political forces, saying: “It is my aim to build together a Cyprus for a new era.”

He also called for close co-operation between parliament and the government in a bid to achieve the best results for the country, as he praised MPs for contributing to efforts to pull Cyprus out of the financial rut it was in five years ago.

“It would constitute unforgivable arrogance and ingratitude towards you if I claimed that progress achieved so far is only owed to the government and not the co-operation between us,” he said.

He said his vision was to build the island’s future collectively, announcing the creation of a team that will study the election programmes of his opponents and pick out parts that could be implemented.

The presidential system, he added, allows for government stability, but without the cooperation of the government and the legislature stability is transformed into stagnation and the best interest of the people and the state are not served by this.

Anastasiades was re-elected during the second round of the presidential elections on February 4, backed by the ruling Democratic Rally (DISY) party, where he secured 215.281 votes or 55.99 per cent of the vote.

The new cabinet will be sworn in on Thursday.

Lebanon’s Hariri arrives in Riyadh for first visit since ‘resignation’

Toys R Us goes into administration in Britain, putting 3,200 jobs at risk (Updated)