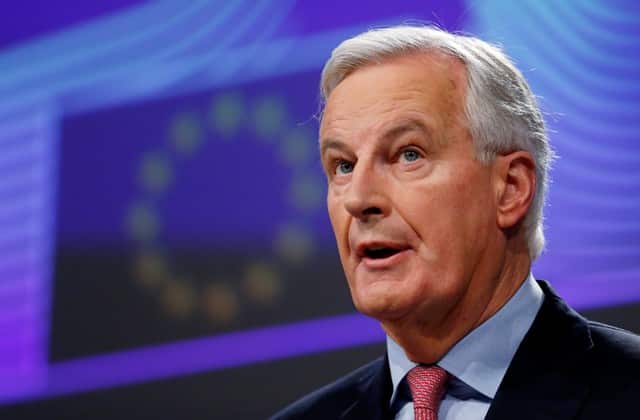 The European Union could maintain much of its sway in Northern Ireland after Brexit under a draft treaty published on Wednesday that caused anger in London and Belfast as the EU warned time was running out for a deal.

Brussels’ chief negotiator Michel Barnier denied that the proposal for avoiding a disruptive EU-UK “hard border” on the island of Ireland would loosen Northern Ireland’s constitutional ties to the rest of the United Kingdom and stressed he was open to other solutions to the border dilemma that Britain may offer.

“Daily life around the border should continue as today,” Barnier told reporters as the European Commission published its draft withdrawal treaty.

However, he rammed home that “time is short” before Britain will be out of the EU in exactly 13 months. He called on Prime Minister Theresa May to “pick up the pace” of negotiations so that a withdrawal treaty, including terms for keeping the status quo during a two-year transition period, could be agreed this autumn in order to be ratified by parliaments before next March.

He repeated that the EU is “preparing for every situation” in case no deal is struck and the continent’s second-biggest economy lurches chaotically out of the Union after 46 years.

May, who will lay out her vision for a post-Brexit free trading relationship with the EU on Friday, said no government could ever agree to the EU proposals and said she would work to protect UK unity in the negotiations. She again ruled out a customs union – something that her Labour opponents advocate as a way to avoid disruptive controls at Ireland’s EU-UK border.

Speaking in parliament in London while Barnier was speaking in Brussels, she repeated that she wanted to avoid a hard border. Her pro-British allies in Belfast, on whom she relies for a slim majority to see through her Brexit legislation, pulled no punches in deriding Brussels’ proposals for a “common regulatory area” comprising the EU and Northern Ireland.

“This is a ludicrous, over-the-top suggestion put forward by Michel Barnier. It will not go anywhere. The way forward is to get into the trade talks and then and only then will you know what the border arrangements need to be,” the Democratic Unionist Party’s Nigel Dodds told BBC Radio Ulster.

The UK Independence Party, which helped force the referendum in which Britons voted to leave the EU in 2016, accused the EU executive of trying to “annexe” Northern Ireland.

Unionists fear that raising new barriers with the British mainland could increase the chances of a future move to reunite the province with EU member the Irish Republic. Barnier conceded there might have to be extra checks on trade between Northern Ireland and the mainland but said there would not be a “border.”

Dismissing suggestions that the draft was an attempt to “shock” Britons into concluding a deal, Barnier insisted no one in Britain should be surprised by it, as it was based on interim accords reached in December, as well as on known EU positions which Britain is resisting but are part of negotiations.

“There is no arrogance here,” the former French minister said, insisting he merely wanted to see an orderly Brexit.

The draft treaty sees a joint EU-UK committee overseeing the arrangements but the European Court of Justice remaining the ultimate authority to resolve disputes.

The Irish proposal was, he said, in line with a “backstop” publicly agreed with May in December and could be superseded if Britain puts forward a detailed alternative solution. He said the treaty made no mention of a clause in December’s EU-UK joint report that there be no divergence between Great Britain and Northern Ireland because that was an internal UK matter.

Barnier renewed his view that the kind of future trade proposals which May is widely expected to make on Friday to maintain a mixture of common and different regulations with the EU were not acceptable. “There will be no cherry-picking,” he said, referring to EU concerns Britain wants a sweetheart deal.

Barnier said he would engage in a new round of negotiations next week and would also meet leaders of Northern Ireland early in the week. He stressed that there remain “significant divergences” in talks on whether Britain might get a transition.

Rare black flamingo returns to base