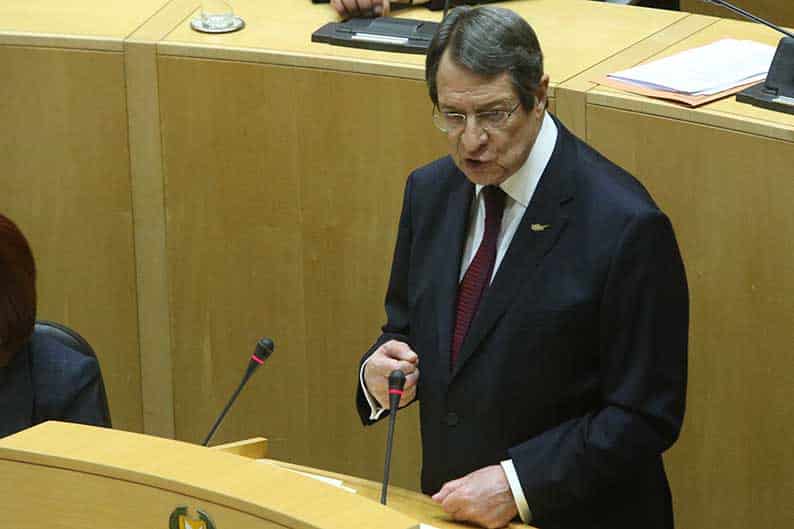 Speaking on domestic policy for 2018-2023, during his swearing-in address to the House, President Nicos Anastasiades said more than 20 national strategies were in the works.

Dozens of new bills were already before parliament or would be after the inauguration of the new cabinet, he said.

Among them are public sector reforms, e-governance, research and innovation, support for start-ups, people with disabilities, children’s rights, anti-corruption, tourism and the development of rural and mountainous regions.

“Our goal is to create a state that through solid fiscal policy will guarantee a dynamically developing economy with a new, modern and integrated development model,” he said, pledging a policy of balanced budgets and government surpluses.

“With new initiatives we will continue the policy of reducing taxes and fostering entrepreneurship, raising family income and attracting new investment,” he said.

These would lead to the effective tackling of unemployment, create more high-paying jobs and protect labour rights.

Anastasiades said his government was aiming for an unemployment rate of 4-5 per cent and the introduction of a national minimum wage for all occupations, an election promise.

Addressing the issue of non-performing loans in the banking sector, Anastasiades spoke of strengthening the institution of the financial ombudsman and the creation of new tools “always in cooperation with parliament” to more effectively address the problem.

“I want to reiterate that our goal is to exploit any creative proposals from whichever political force they come,” he said.

The plan was the gradual restoration of much of the damage suffered by those who lost money in the bail-in. This would include reimbursement of provident funds to the tune of 75 per cent, which would cost €500m, and new legislative amendments to enable a mooted national solidarity fund to which the state would contribute financial resources depending on the performance of the economy, but also by granting state property, movable or immovable.

Also, a priority over the next five years would be to further strengthen small and medium-sized business (SMEs) by offering tax breaks and incentives, along with new programmes for women and youth entrepreneurship, and the development of e-commerce. These small examples were only indicative of a slew of other measures on the cards, the president said

“Our priorities include the creation of a new development model that will not only extend and strengthen traditional productive sectors of the economy, such as services, tourism and shipping, but also create new productive sectors,” he said citing development in the IT, transport, health, education and audio-visual sectors.

Reform of local government was still on the cards as was the new under-secretariat for tourism, he added.

He also spoke of welfare programmes such as expanding the Guaranteed Minimum Income (GMI) scheme, more help for pensioners, people with disabilities, single-parent families, those with chronic diseases and refugees. He touched on stricter actions against football hooligans, and also the environment and animal welfare.

“I want to be categorical: What has been agreed will be implemented within the deadlines fixed for them,” Anastasiades said.

Classes to resume at Florida school two weeks after massacre