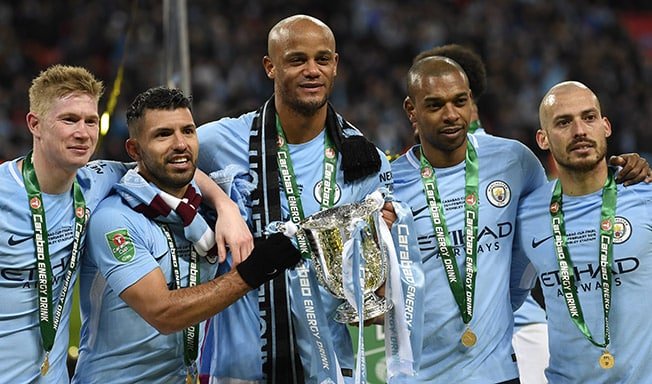 Man City won manager Pep Guardiola his first silverware in England on Sunday with victory over Arsenal in the League Cup final. The two sides face each other again on Thursday

Manchester City have won many admirers in their “wonder season” but need more trophies to be considered the best Premier League team ever, ex-Manchester United winger Ryan Giggs has said.

City won manager Pep Guardiola his first silverware in England on Sunday, romping to a 3-0 victory over Arsenal in the League Cup final. The runaway league leaders are also on course to win a third Premier league title in seven seasons.

“Everyone recognises the football that they’re playing this year is high up there with some of the best we’ve seen in the Premier League era,” former Wales winger Giggs said.

“But to compare them to ourselves, Arsenal and Chelsea, you have to win multiple titles. You have to be consistent, not just one wonder season, which they are having.”

United have won 13 championships since the Premier League era began in 1992-93, Chelsea have five, Arsenal are third in the list with three followed by City on two.

Giggs, who won 13 Premier League titles with United and made a record 963 appearances for the club, said City were capable of reaching greater heights in the coming seasons.

“It’s up to other clubs, the likes of United, Liverpool, Chelsea, Tottenham to do better next year and to challenge and see how they handle that.”

City, who have 72 points from 27 games and are 13 points above their neighbours United, visit sixth-placed Arsenal in the league on Thursday night.

Arsenal manager Arsene Wenger meanwhile has urged his team to make the most of their chances when they face City for the second time this week.

“We are very disappointed because we lost an important game. We need first to recover and then prepare for the next challenge together,” Wenger told a news conference on Wednesday.

“When you look at the end of the game Man City had three shots on target and we had two. We need to turn the decisive moments in our favour and play with more freedom than we did.”

City can re-establish a 16-point lead atop the standings when they travel to Arsenal, who are 27 points behind Guardiola’s side.
The defeat, along with Arsenal’s inconsistent performances this campaign, has led a number of supporters and pundits to call for an end to Wenger’s 22-year reign but the Frenchman said that he was not worried about his future.

“My position is my position. That’s the last problem I have,” Wenger said. “We are in that kind of situation where you want to focus on the next game,” he said, adding: “My job is to focus on performing.”