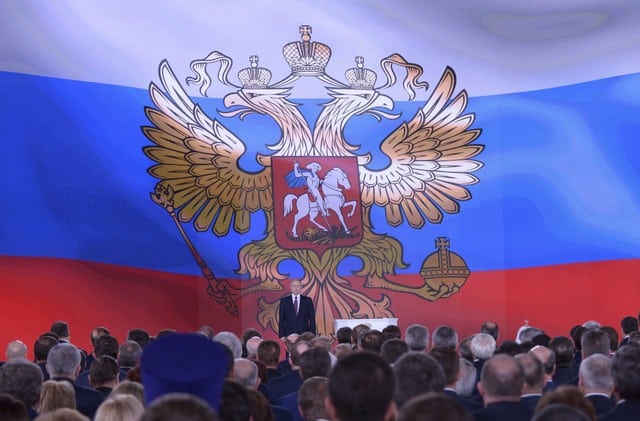 Russian President Vladimir Putin (back) stands on the stage as he addresses the Federal Assembly, including the State Duma parliamentarians, members of the Federation Council, regional governors and other high-ranking officials, in Moscow

President Vladimir Putin unveiled an array of new nuclear weapons on Thursday, in one of his most bellicose speeches in years, saying they could hit almost any point in the world and not be intercepted.

Speaking weeks before an election he is expected to win, Putin also said that a nuclear attack on any of Moscow’s allies would be regarded as an attack on Russia itself and draw an immediate response.

Putin, who polls indicate should be easily re-elected on March 18, backed his tough rhetoric with video clips of some of the new missiles he was talking about, which were projected on a giant screen behind him at the conference hall in central Moscow where he was addressing Russia‘s political elite.

“They have not succeeded in holding Russia back,” said Putin, referring to the West.

“Now they need to take account of a new reality and understand that everything I have said today is not a bluff.”

Among the new weapons that Putin said were either in development or ready: a new intercontinental ballistic missile, a small nuclear warhead that could be attached to cruise missiles, underwater nuclear drones, a supersonic weapon and a laser weapon.

The audience, made up of Russian lawmakers and other leading figures, frequently stood up and applauded his presentation, which culminated with the Russian national anthem being played.

Putin, who has dominated his country’s political landscape for the last 18 years and often used anti-Western rhetoric to mobilise support, said the technological advances meant that Nato’s build-up on Russia‘s borders and the roll-out of a US anti-missile system would be rendered useless.

“I hope that everything that was said today will sober up any potential aggressor,” said Putin.

“Unfriendly steps towards Russia such as the deployment of the (US) anti-missile system and of Nato infrastructure nearer our borders and such like, from a military point of view, will become ineffective.”

Steps to contain Russia would also become unjustifiably expensive and pointless, he forecast.

The Russian leader also voiced concerns about a new US nuclear doctrine, saying that Russia‘s own doctrine was defensive and only envisaged the use of nuclear weapons in response to an attack.

Russia has repeatedly said it is keen to hold talks with the United States about the balance of strategic nuclear power.

“We will view any use of nuclear weapons against Russia or its allies, be it of small, medium or any force, as a nuclear attack on our country,” said Putin.

“Our response will be immediate. Nobody should have any doubts about that.”

EU lawmakers back action against Poland amid democracy concerns