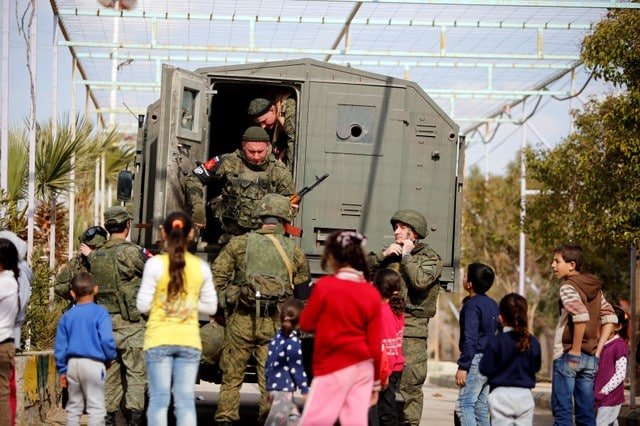 Russian soldiers are seen with Syrian children at Wafideen camp in Damascus, Syria

A Russian plan for a five-hour pause in fighting in Syria’s eastern Ghouta needs to be expanded to allow aid deliveries to enter and civilians and medical cases to leave, United Nations officials said on Thursday.

Hundreds of people have died in 11 days of bombing of eastern Ghouta, a swathe of towns and farms outside Damascus that is the last major rebel-controlled area near the capital.

The onslaught has been one of the fiercest of Syria’s civil war, now entering its eighth year.

“You are failing to help us help civilians in Syria,” UN humanitarian adviser Jan Egeland told diplomats from 23 states attending a weekly meeting in Geneva.

“Eastern Ghouta is devoid of respect for international law.”

Some 400,000 people trapped in government-besieged eastern Ghouta need life-saving aid, and the only convoy allowed so far this year was a small one in mid-February with aid for just 7,200 people, Egeland said.

Russia, a strong ally of Syrian President Bashar al-Assad, has called for daily five-hour local ceasefires to establish what it calls a humanitarian corridor so aid can enter the enclave and civilians and wounded can leave.

But the first such truce on Tuesday quickly collapsed when bombing and shelling resumed after a short lull.

Egeland said a “two-way” humanitarian corridor was needed, with several convoys each week into eastern Ghouta, while 1,000 priority medical cases must be evacuated for treatment.

“I have to say I know no humanitarian actor… who thinks the five hours is enough for us to be able to deliver relief into eastern Ghouta and to organise orderly medical evacuations out,” he said of the Russian unilateral declaration.

During Thursday’s meeting of the humanitarian taskforce in Geneva, the United Nations received notice that it may get permission from Damascus to go to Douma in eastern Ghouta.

“We have 43 trucks standing by to go there and full warehouses to load into the trucks as soon as we get the permit,” Egeland said.

UN Syria envoy Staffan de Mistura told reporters the world body would not give up seeking a full 30-day ceasefire, as mandated by the UN Security Council last Saturday.

“We are determined because otherwise this becomes the copycat of Aleppo,” de Mistura said, referring to a battle for besieged rebel-held eastern Aleppo in late 2016.

Ghanem Tayara, chairman of the Union of Medical Care and Relief Organisations (UOSSM) working in Syria, said some 1,123 patients needed evacuation from eastern Ghouta, where two hospitals have been bombed since Saturday’s resolution.

“The UN resolution has been ignored completely,” he said.

All the president’s men…and women