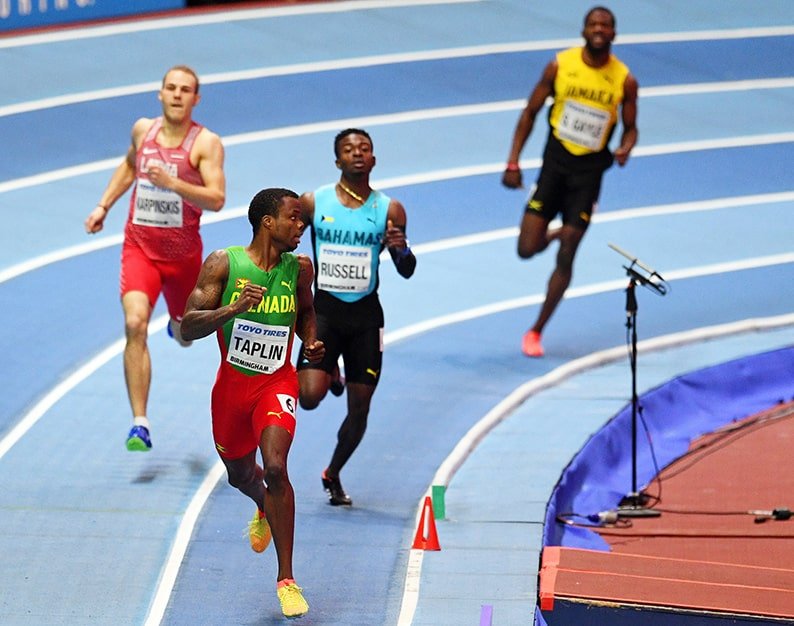 Austris Karpinskis of Latvia, Bralon Taplin of Grenada, Alonzo Russell of the Bahamas, and Steven Gayle of Jamaica in action during the men's 400m heats at the IAAF Athletics World Indoor Championships at Arena Birmingham. All athletes competing in the men's 400m heat 3 were disqualified, as Qatar's Abdalleleh Haroun was given a red card for a false start and all others came out of their lanes. EPA

Every runner, including the world’s fastest man this year, was disqualified in a bizarre 400 metres heat that made athletics history on the second day of the world indoor championships in Birmingham on Friday.

Bralon Taplin was among the casualties after appearing to qualify for the semi-finals later on Friday by winning the third heat comfortably in 46.37 seconds.

But the Grenadan was ruled to have run out of his lane, along with the other three finishers, Jamaica’s Steven Gayle, Latvia’s Austris Karpinskis and Alonzo Russell from the Bahamas.

It is the first time every athlete has been disqualified from a heat at a major championships, according to statistician Mark Butler.

Grenada officials launched an appeal, but it was rejected, as was that for Costa Rica’s Nery Brenes, who was disqualified from a later heat, also for a lane infringement.

There was no such drama in the final heat when Pavel Maslak eased though, qualifying behind Spain’s Oscar Husillos as the Czech indoor specialist attempts to become the first three-time 400m champion at the event.

In the women’s 400m heats, Americans Courtney Okolo (51.54) and Shakima Wimbley (52.43) both qualified comfortably, along with Switzerland’s Lea Sprunger (52.46), who is expected to be their main rival.

Double Olympic sprint champion Elaine Thompson of Jamaica also eased through to the later stages of the 60m, posting 7.20 to finish behind Marie-Josee Ta Lou from the Ivory Coast, who continued her recent good form to win the heat in 7.17.

Thompson, who won bronze at the 2016 world indoors but has yet to replicate her best form of last year, appeared composed in making it through in what is shaping up to be one of the championship’s most hotly contested events.

While Dutchwoman Dafne Schippers accelerated steadily to win her heat in 7.19, U.S. national champion Javianne Oliver was slowest off the blocks in the first heat, looking sluggish in posting 7.29 to finish third behind Norway’s Ezinne Okparaebo.

The 23-year-old American ran the world’s best this year of 7.02 at altitude but showed her inexperience at this level by only just making it through.

France’s Carolle Zahe posted the fastest time of 7.11 in winning Heat Four, saying: “It’s an honour for me to run with the top sprinters and I hope I’m getting better through the weekend”.

In the heptathlon Frenchman Kevin Mayer took a strong grip on the gold medal as he seeks to establish himself as the true heir to American Ashton Eaton.

Mayer recorded personal bests in the 60m and shot put, and recorded a solid long jump, to lead Canada’s Damian Warner by 45 points after three events.

In the 3,000m, Ethiopians Yomif Kejelcha and Selemon Barega won the heats ahead of Sunday’s final.

It was later announced that American Paul Chelimo had been disqualified for stepping inside the track.

“I do not know what was going on and why I was disqualified,” he said. “I was careful and watched the steps. There was no intention to do it.” Germany’s Richard Ringer was also disqualified from the 3,000m after barging another athlete, with his appeal also rejected.

Amid continued bad weather outside the arena, the organisers blamed empty seats on the closure of local schools, which had been allocated tickets.

“Unfortunately, due to adverse weather conditions, the majority of the schools in Birmingham and across the region are closed today and so the school children, along with the other spectators who aren’t able to travel, won’t be able to join us today, a statement from the Local Organising Committee said.