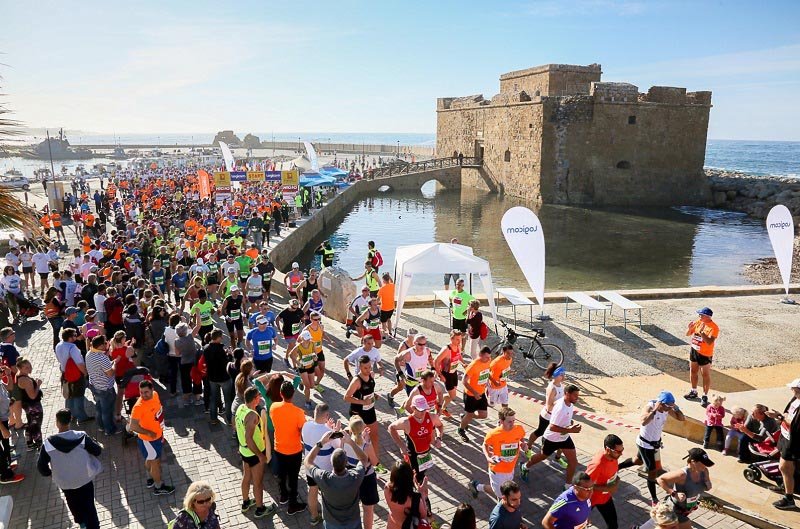 Close to three thousand runners will take part in the twentieth Logicom Cyprus Marathon in Paphos this weekend.

The popular event, which has seen a huge spurt in popularity over the last couple of years, will host a record number of runners from all over the world, according to race director, Stavros Kakourides.

“We have 2,800 runners registered to take part and we would invite members of the public to attend the event to cheer the participants on,” he said.

He added that the event can take a maximum of 2,900 runners and not 2,700 as had been previously stated.

The marathon will get underway at Aphrodite’s Rock at 7.30am on Sunday March 4th, and on the same day there is a half-marathon at 8.25am, a 5km fun run at 8.30am and a 10km road race. These three races start and finish next to Paphos castle and follow different courses.

Following his son’s participation in the New York marathon last year, where he gleaned many ideas, Kakourides has modified them for Cyprus and incorporated them into this year’s event, he said.

“Runners from all over the world are sharing their stories on Facebook, it’s a great way for them to connect, we have also printed a comprehensive programme which is included in all of the runners goodie bags,” he said.

This includes race instructions, how to put on allocated numbers, where to start and other info, he added.

Participants are given a package that includes a marathon technical t-shirt, a supreme medal, energy gels, information on fluid stations every 3 km providing water, electrolytes, energy gels, sponges and bananas, a bus pass for the marathon weekend, chip timing, finish line entertainment, a massage and drinks.

On Facebook runners from more than 50 countries are sharing their stories in answer to questions posed, including what they are looking forward to on race day, who or what inspires them to run, what running means to them, meeting up and socialising in Paphos and if running for charity, which one.

Plamen from Bulgaria said on the social media forum that he has been running mini marathons for 3 years and will be in Paphos to participate in the 5km run with his girlfriend and friends.

“I am coming for a place in top 10 and one of my friends Kalin hopes to win the race,” he wrote.

Some are running for fun and in costume, many are raising funds for charities and others want to win, said Kakourides.

This year, 1,200 of the participants are from overseas and fifty per cent of them – around 600 – are travelling form the UK, which is currently being hit by bad weather and snow storms.

“We are really hoping that the weather in Britain won’t affect us and the runners that are coming. Some people are already here and you can see them training on the roads of Paphos.”

A number of the town’s roads will be closed or partially closed on Sunday to accommodate the runners, including Poseidonos Avenue and Spyros Kyprianou Avenue, he said.

Our View: Surely the president’s law firm is involved in a conflict of interest