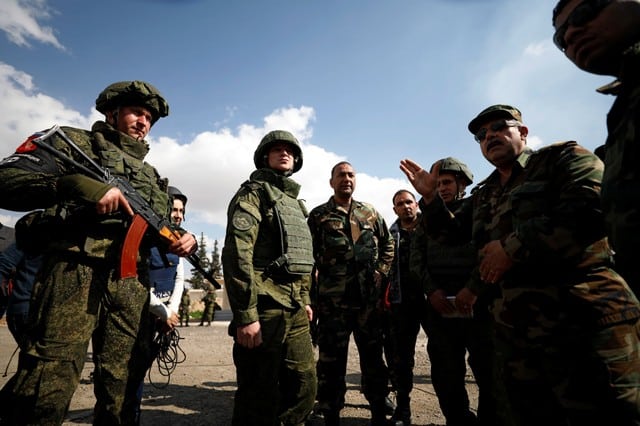 Russian and Syrian soldiers are seen outside eastern Ghouta in Damascus, Syria

Syrian government forces aim to advance into the eastern Ghouta region one “bite” at a time, a pro-government commander said on Friday, as a war monitor said the army had seized new ground from rebels.

In one of the deadliest offensives of the war, government air strikes and bombardment have killed hundreds of people over 12 days in eastern Ghouta, an area of besieged towns and farms that is the last major rebel-controlled area near the capital.

US President Donald Trump spoke to the leaders of France and Germany about the situation on Friday. France said President Emmanuel Macron and Trump agreed to work together to implement a UN-backed ceasefire that has failed to stop the onslaught, and called on Russia to get Damascus to abide by it.

The Security Council on Saturday called for a 30-day countrywide truce. Russia, which backs the Syrian government in the war, has instead called for daily humanitarian ceasefires from 9 am to 2 pm (0700 GMT to 1200 GMT).

The US State Department on Thursday dismissed Russia’s humanitarian ceasefire plan as “a joke”, saying people were afraid to leave the area through a “humanitarian corridor” because of fear of conscription, exile or death.

The war has escalated on several fronts this year, with the collapse of Islamic State giving way to other conflicts between Syrian and international parties, including Turkey which said eight more of its soldiers had been killed fighting Kurdish militias in the Afrin area of north-western Syria.

Government forces, including the elite Tiger Force, have been attacking rebels in the Maraj area of the Ghouta for several days. The Syrian Observatory for Human Rights said on Friday they had captured two villages – Hawsh al-Dawahra and Hawsh Zreika – in addition to hills and farmland.

Rebel sources could not immediately be reached for comment on Friday.

The spokesman for Jaish al-Islam, one of the main Ghouta rebel groups, said on Thursday government forces had tried to divert their attention by opening a new front in the Hazerma area while also waging battles in nearby Hawsh al-Dawahra.

The commander in the military alliance that backs Assad said government forces had taken some villages on the Maraj area.

“What is happening at present is biting and taking some villages from the eastern side,” the commander told Reuters.

The Observatory says the government bombardment of Ghouta has killed 617 people since Feb 18, while intensified rebel shelling of government-held areas of Damascus has killed 27.

Assad has steadily won back territory from rebels with critical military backing from Russia and Iran. With no sign of decisive Western pressure, eastern Ghouta appears on course to eventually fall to government forces too.

Damascus appears to be applying tried and tested military means, combining air strikes and bombardment with ground assaults, as it did to recapture eastern Aleppo from rebels including groups that once received US support.

While Washington has backed away from supporting rebels fighting to topple Assad, Iranian and Russian military aid to the government has remained steadfast: Iran’s supreme leader vowed on Thursday to continue support for Damascus.

Macron and Trump spoke by telephone to discuss the situation in Syria, and the enforcement of a ceasefire aimed at ending hostilities, opening access to humanitarian aid in eastern Ghouta and evacuating the wounded, the Elysee Palace said.

The two leaders agreed that Russia needed to “unambiguously exert maximum pressure on the regime in Damascus” for it to abide by the ceasefire, said the Elysee statement.

Macron also said France would have a “firm response” if it transpired chemical weapons led to civilian deaths in Syria.

The Syrian government has consistently denied using chemical weapons, though Western states have accused it of doing so.

An investigation established by the United Nations concluded last year that Damascus was behind an attack with sarin nerve agent in northwestern Syria last April, and also that government forces had used chlorine as a weapon on three occasions.

Trump also spoke to German Chancellor Angela Merkel by phone, agreeing that Damascus, Russia and Iran should “promptly and fully” implement the UN resolution for a ceasefire, Merkel’s spokesman said.

UN officials have called for the Russian ceasefire plan to be expanded to allow aid deliveries and for civilians and urgent medical cases to leave.

Damascus and Moscow have accused rebels of preventing civilians from leaving eastern Ghouta. Rebels deny this.

The UN children’s agency UNICEF said on Friday the Syrian government may allow an aid convoy with supplies for 180,000 people to go to the eastern Ghouta town of Douma on Sunday.

Geert Cappelaere told a news conference that there was no sign of agreement on further convoys to serve the rest of the enclave’s 400,000 people, nor any agreement on evacuation for some 1,000 people in dire medical need.

“We have an indication from the government of Syria that an aid convoy will be allowed in on March 4, that is the day after tomorrow. We hope that indication turns into a bold commitment,” Cappelaere said. “We are ready to move in.”

The UN Human Rights Council in Geneva will hold an urgent debate on eastern Ghouta, at Britain’s request.

Turkey launched its campaign against the Kurdish YPG militia in the Afrin region in January. Ankara regards the YPG as a terrorist group linked to the outlawed Kurdistan Workers Party (PKK) which has waged a three-decade insurgency against the Turkish state.

Eight Turkish soldiers were killed and another 13 were wounded in clashes in northwest Syria’s Afrin region on Thursday, Turkey‘s armed forces said, bringing to 41 the death toll among Turkish soliders in the Olive Branch operation.

The first performances of spring