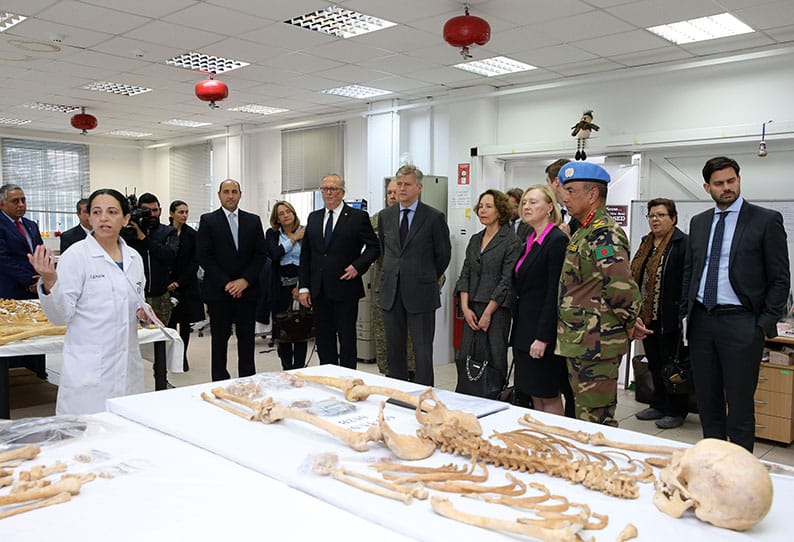 AS A result of the strategic review of the UN peacekeeping force in Cyprus, the organisation is convinced that Unficyp will be fully equipped and resourced to implement its mandate and will be in a better position to do it, UN Under-Secretary-General for Peacekeeping Operations Jean-Pierre Lacroix said on Friday.

“We are proceeding to certain adjustments which will, I think, enable the mission to be even more effective in its prevention role,” Lacroix said after a meeting with President Nicos Anastasiades in Nicosia, in the presence of UNSG’s Special Representative in Cyprus Elizabeth Spehar.
The UN official said they talked about the important role that Unficyp is playing according to its mandate in helping to defuse tension, in helping stability, and also in preventing tension “and helping in liaison work with the other side.”

Asked if there is a scenario of downsizing the UN personnel in Cyprus, Lacroix said the Security Council had requested a strategic review of Unficyp, noting that “we have been conducting strategic reviews on most of our peacekeeping operations and this something that we continue.”

“All peacekeeping operations need to evolve. We need to make sure that they are as best equipped as possible in their resources, in their mandate, in their finance, to fully comply with their mandate. So, we did that strategic review with Unficyp and we are currently implementing it,” he said.

He added that “as a result of the review we are convinced that Unficyp will be fully equipped and resourced to implement its mandate and will be in a better position to do it because we are proceeding to certain adjustments which will, I think, enable the mission to be even more effective in its prevention role.”

The review will see a slight reduction in Unficyp staff and cuts in operating expenses, which will lead to the reduction of the force`s overall overheads.

Lacroix also met with Turkish Cypriot leader Mustafa Akinci and had lunch later on with members of the diplomatic community.

Later in the day he visited the lab of the Committee on Missing Persons (CMP).

The UN official was briefed by the committee members on efforts to locate remains of missing persons and on the activities of the lab.

Greek Cypriot member of the CMP, Nestoras Nestoros, said that Lacroix’s visit sends out the message that the UN will continue to support the committee to resolve a number of issues which cannot be dealt with only by the CMP.

“We realise that the mission is here for many, many years and that for some people at the UN this may be considered as a burden, but the results are very positive,” he said, adding that Unficyp plays an important role in maintaining tranquillity in Cyprus.
“We expect that any revision that may take place at the international level will not affect Unficyp’s role, taking into consideration that the Republic of Cyprus is a small state occupied by foreign troops, it is very close to Turkey and to other troubled areas in the region.”

He said that, since Spehar was present at the meeting, Anastasiades held a preliminary discussion as regards the state of play in Cyprus. He reiterated his readiness to continue negotiations – as long as provocations and violations by Turkey are terminated – within the existing framework, with no new preconditions or demands.

He also said that Anastasiades “reiterated to Spehar his readiness to meet with Mr. Akinci, as they will have  to have at some point  a tete-a-tete conversation, if the process is to resume.”

Anastasiades has the will and we are waiting to listen to the messages of the other side, Prodromou said, adding that there is no development on this so far.

During his two-day visit Lacroix, who arrived on Wednesday, also met with Unficyp peacekeepers, visited the mixed village of Pyla and met with the Greek Cypriot and Turkish Cypriot community leaders, and spoke at an event to mark International Women’s Day.

Unficyp is one of the longest-running UN Peacekeeping missions. It was set up in 1964 to prevent further fighting between the Greek Cypriot and Turkish Cypriot communities on the island and bring about a return to normal conditions.

The Mission’s responsibilities expanded in 1974, after the Turkish invasion.

Coronavirus: Glimmer of hope for students trapped in the UK