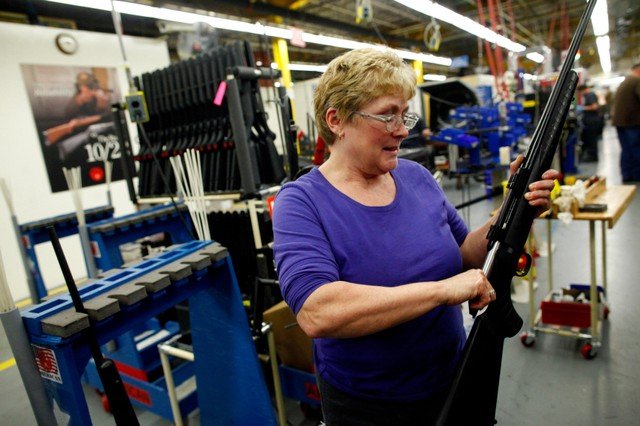 The world’s largest asset manager put U.S. gun-makers on notice that it is no longer business as usual in the wake of a shooting that killed 17 at a Florida high school.

BlackRock Inc said it will speak with weapons manufacturers and distributors “to understand their response” to the second-deadliest shooting at a public school in U.S. history, putting pressure on companies such as Sturm Ruger & Company Inc and American Outdoor Brands Corp.

BlackRock is the largest shareholder in both gunmakers and has more than $6 trillion in assets under management. It stopped short of saying it would divest its funds of gun companies, however.

Underlining how the Valentine’s Day massacre at the Florida high school has rattled the finance industry’s relationship with gunmakers, First National Bank of Omaha said separately on Thursday it would not renew a contract with the National Rifle Association (NRA) to issue a NRA-branded Visa card. The NRA did not immediately respond to a request for comment.

Gun control activists have campaigned in recent days for everything from banning semi-automatic guns like the one used in the Florida shooting to asking public pension funds to sell gun stocks.

BlackRock said it cannot sell shares of a company in an index, given its fiduciary responsibilities. Instead, “We focus on engaging with the company and understanding how they are responding to society’s expectations of them,” BlackRock spokesman Ed Sweeney said in an email.

Sweeney declined to give more specifics, such as what if any changes BlackRock might seek at weapons makers or at retailers that sell their products.

But with so much money under management, BlackRock often has among the largest stakes in U.S. public companies, giving it much potential influence over their policies.

It owns about 17 percent of the total shares of Sturm Ruger and has about 11 percent of American Outdoor Brands, for instance, according to U.S. regulatory filings. The shares are largely held in funds that track indexes, such as the $6 billion iShares U.S. Aerospace & Defense ETF.

BlackRock and other large index fund managers carry clout partly through their proxy votes, such as for directors and on matters brought to a vote by shareholders.

Both American Outdoor and Sturm Ruger for instance face shareholder resolutions calling for them to report on their efforts related to gun safety, according to a list of resolutions kept by the Interfaith Center for Corporate Responsibility.

Representatives for American Outdoor Brands and Sturm Ruger did not immediately respond to requests for comment. Shares in both companies rallied on Thursday after U.S. President Donald Trump advocated tightening background checks for guns in response to the most recent school shooting.

BlackRock CEO Larry Fink in January wrote a letter to corporate executives saying that companies need to show how they make “a positive contribution to society” in addition to delivering financial performance.

And he said that BlackRock would increase its own engagement with companies to improve its oversight over those companies, doubling to 64 the number of people it has dedicated to “investment stewardship,” its team that focuses on other company’s governance.

Apoel and Apollon go into playoffs with comfortable lead