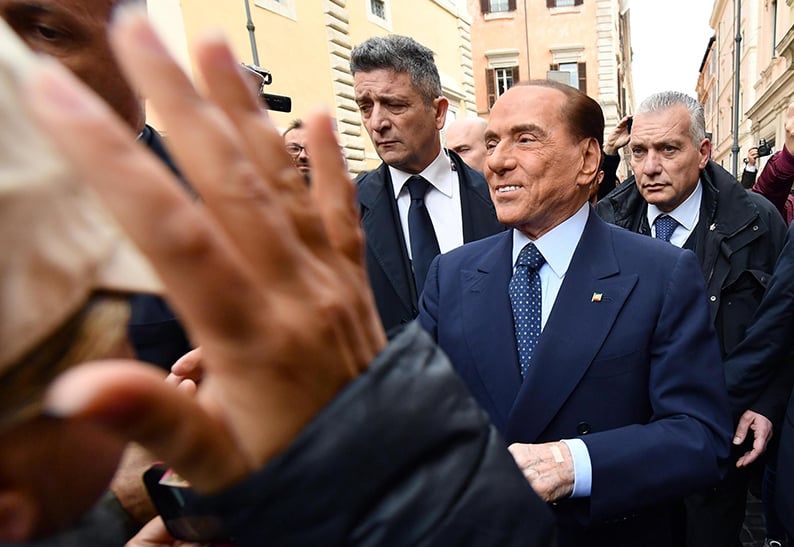 Just one month before today’s national elections in Italy, Luca Miniero’s satirical movie Sono Tornato (I’m Back) hit the screens all over the country. It imagined the fascist dictator Benito Mussolini returning to the Italy of 2018, and its timing was perfect.

”The Italians, unlike the Germans, never dealt with their dictator, they have never removed him,” said Miniero. “Watching what is happening today in our country, I am convinced that if Mussolini came back he would win the election.” But of course, Mussolini isn’t coming back. It’s only Silvio Berlusconi again.

The Italian counterpart of Donald Trump has already been prime minister four times, and he has been banned from political office for six years because of a conviction for tax fraud. He is also 81 years old. But they forgot to put a stake through his heart, and Berlusconi is back in business as the man behind the right-wing coalition that may form the next government in Italy.

It certainly won’t be the populist Five-Star Movement, which refuses to enter coalitions with other parties. According to the last opinion poll, it will emerge as the largest single party, with around 28 per cent of the vote, but that’s not nearly enough.

The governing centre-left coalition, whose parties are running separately because of their many disagreements, will end up in about the same place. Its biggest member, the Democratic Party, will get around 23 per cent, but with various smaller allies it might make it up to 30 percent. Again, not enough.

Whereas Berlusconi’s Forza Italia (‘Let’s Go, Italy’), running in tandem with the hard-right, anti-immigrant Northern League, are likely to get close to 40 per cent of the vote. If they then make deals with a few small parties that do verge on fascism, they could form a majority government. Berlusconi’s great wealth, derived from his huge media holdings, would give him a dominant role behind the scenes in such a coalition, but he is legally barred from even running for parliament, let alone becoming prime minister. So who would it be?

The dark-horse candidate is Giorgia Meloni, the Trump-lite leader of one of the smaller parties, Brothers of Italy, but it would probably the Northern League’s leader, Matteo Salvini. You might call Salvini Trump-heavy: he hailed The Donald’s election as “the revenge of the people, of courage, of pride…and one in the eye for the bankers, the speculators and the journalists.”

Italians are quite justifiably fed up with the way their country has been run in recent years. Unemployment is 11 per cent, but among the under-25s it is close to 40 per cent, and over 100,000 young people left the country last year in search of work elsewhere. Average family incomes, which fell dramatically after the 2008 financial crisis, have still not recovered to the 2007 level.

But the biggest issue is immigration: in the past four years Italy has received 600,000 illegal migrants, mostly from African countries, and all the major parties are promising to do something about it. Berlusconi calls the million or more illegal migrants living in Italy a “social time bomb ready to explode”, and talks about mass deportations. His prospective coalition partner, the Northern League, puts a number on it: 100,000 repatriated a year.

The outgoing centre-left coalition has actually managed to cut the numbers coming across the Mediterranean by making a deal with Libya, the point of departure for most of the migrant boats. In return for financing the Libyan Coast Guard and various other considerations, it has secured Libyan cooperation in stopping the migrants from setting sail from the Libyan coast in the first place.

As a result, the number of migrant arrivals dropped by a third last year, which should have won the Democratic Party and its allies some credit with the voters. But 119,000 migrants still made it to Italy in 2017, so nobody believes the problem has been solved. The Berlusconi-Salvini coalition is out in front, saying that it will send them all home again, and it resonates strongly with an electorate that has had enough of politics-as-usual.

Since Donald Trump’s election in November 2016, three Western European countries – the Netherlands, France and Germany – have had elections in which nationalist, anti-immigrant parties that are hostile to the European Union, or at least to the euro common currency, have done better than ever before, but have not won power. In Italy, they may actually win.

Why isn’t there any fruit

Glimpses of the post-Cyprob future