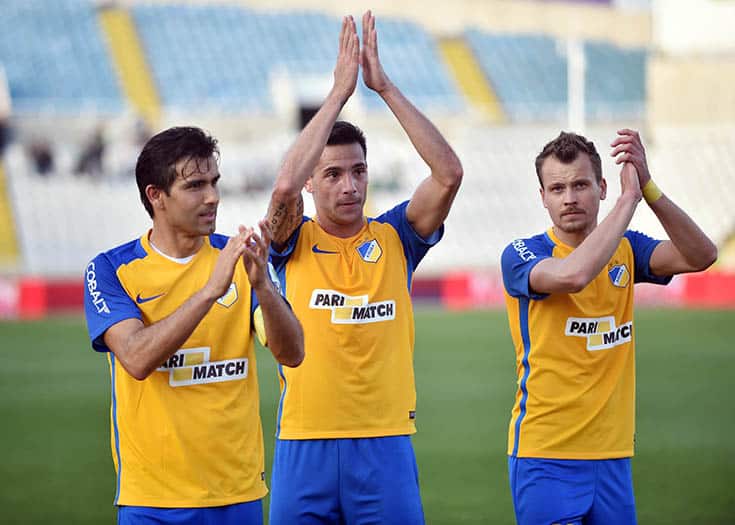 Apoel players celebrate after the game

In the relegation group, the omens are not looking good for Olympiakos who went down 1-0 to Doxa Katokopias, and coupled with Alki’s away win over Ermis Aradippou, they now trail their nearest rivals (Nea Salamina) by four points.

Apoel extended their winning streak against Omonia to 10 games with a comfortable 2-0, thanks to two second-half goals by Lucas de Souza and Guilherme Dellatorre.

It was no more than Apoel deserved as they dominated play, and apart from the final quarter of the game, were rarely troubled by their opponents who paid the price of a defensive mindset with their lone striker Matt Derbyshire having to battle on his own for most of the game.

The win allowed Apoel to regain top spot as Apollon had briefly gone top with a 5-1 thumping of AEL 24 hours earlier.

Apollon made a mockery of the notion that their local derby against AEL would be a closely contested affair.

A stunning second half display by Apollon inflicted a humiliating 5-1 defeat on AEL, with their coach Bruno Baltazar accepting full responsibility and offering his resignation after the game.

The best game of the weekend took place at the Arena stadium where AEK and Anorthosis played out a 2-2 draw.

AEK could have made the game safe in the opening 30 minutes, but poor finishing and some excellent goalkeeping by Ariel Harush kept them at bay.

In fact, it was Anorthosis who opened the score totally against the run of play just after the half-hour mark.

AEK fought back and managed to turn the game around with two goals in as many minutes. Jorge Larena first equalised from the penalty spot and then fired the Larnaca team ahead.

However, twelve minutes from the end a tame shot by Michal Duris somehow found its way past Juan Pablo for the equaliser.

In the bottom group, Alki scored an impressive away win over Ermis Aradippou with their leading scorer Fabricio netting the only goal of the game in the 64th minute.

The win allowed Alki to leapfrog Nea Salamina who lost 3-1 at home to Pafos FC, despite taking an early lead through Carlao.

Sikorski’s equaliser on the stroke of half time turned the tie, with the same player adding another three minutes after the restart. Brules made sure of the points for the Paphos team who now seem set for another year in the top flight.

Doxa showed why they topped the group as they were far better than bottom-placed Olympiakos and won by a 30th minute Asamoah goal.

University staff in UK say strikes are their only option