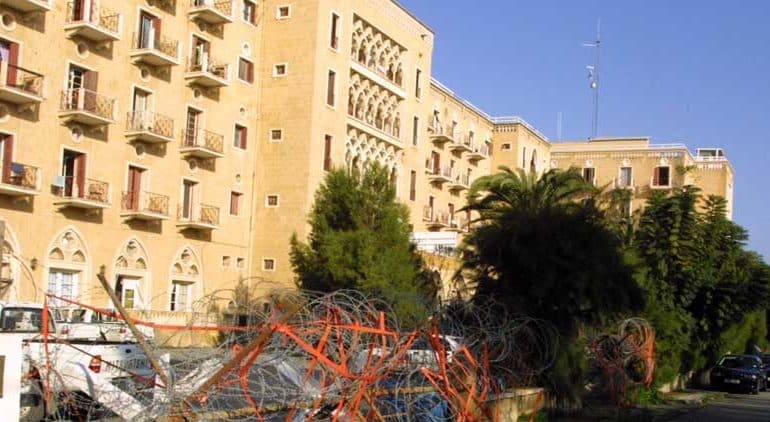 The British contingent of the United Nations peacekeepers in Cyprus is being forced to move from uninhabitable living quarters at the Ledra Palace Hotel in Nicosia’s Green Line after taking up residence there following the Turkish invasion in 1974, and are unlikely to return, the Cyprus Mail has learned.

However, the UN plans to retain possession of the 70-year-old hotel that played host to Hollywood stars and the well-to-do in the fifties and sixties, and later to journalists covering the invasion. But only the ground floor, which is noted for hosting bicommunal events, will now be used.

Though billed as a routine refurbishment, behind the move lies a more complicated situation going back almost two decades when parts of the once-luxurious hotel, now riddled with bullet holes, were first deemed unsafe.

Essentially, the UN does not have the millions needed to refurbish the hotel, and the Cyprus government, whose responsibility it is to carry out repairs, have stalled in paying up, the Cyprus Mail understands.

The 210 British soldiers are to be moved to the United Nations Protected Area (UNPA) at the old Nicosia airport, which is also under UN control. The move is part of a strategic review of Unficyp that was carried out recently. Last week Under-Secretary-General for Peacekeeping Operations Jean-Pierre Lacroix, who was in Cyprus, alluded to “changes” to the status of the Ledra Palace.

Unficyp spokesman Aleem Siddique told the Cyprus Mail on Monday that the hotel would remain in UN hands.

“Due to refurbishment of the upper floors they will be vacated during the course of the year,” he said. “The Unficyp troops based there will be moved to another location. The ground floor will continue to be used for bicommunal meetings.” There was no return date for the 217 British soldiers who live there, he added. The move is to be completed by the end of this year or the latest the beginning of 2019.

The issue over the bad state of the hotel goes back, on the record, to at least 2005, when then UN Secretary-General Kofi Annan said in a report that Unficyp had commissioned an independent engineering survey which found the living facilities to be structurally unsafe and constituted an “unacceptable safety risk”. This problem had been going on for at least five years prior to that. In 2005 it would have cost over $20m to fix the problems.

In 2007 some effort was made to fix part of the upper floors where at least 40 rooms had been marked as condemned and shuttered up. British troops were then living in 91 of the rooms.

So bad was the situation that the Cyprus government was being strongly pressured by Britain and the UN to act.

By then British soldiers for years had put up with blocked toilets overflowing with sewage, broken pipes and falling plaster, piles of pigeon droppings on the balconies, dangerously exposed wires and electrical fittings, and broken lifts and air-conditioning systems.
The situation came to a head in February 2007 when a British parliamentary group visited the hotel. One member of the group who called the conditions “shameful”, warned the Cyprus government to act swiftly unless it wanted the UK to withdraw from Unficyp.

Though there were some repairs carried out later in 2007, paid for by the government, more than a decade later, the UN is finally calling a halt.

“The upper floors are not up to code,” said a Cyprus Mail source, who added that to fix all of the problems at the Ledra Palace would be “prohibitively expensive” and there was simply nothing in the UN budget for that kind of work.

The source said the Cyprus government was wholly responsible for refurbishing, and other UN member states would not pay on these grounds alone.

At the same time, the UN could not have troops exposed to the continued risks, so they would be relocated.

“The top floors will be moth-balled with minimum works for structural safety,” the source said, adding that it was most likely the British contingent would not be returning there.

The reason the UN was hanging on to the ground floor was the hotel’s long association with bicommunality.