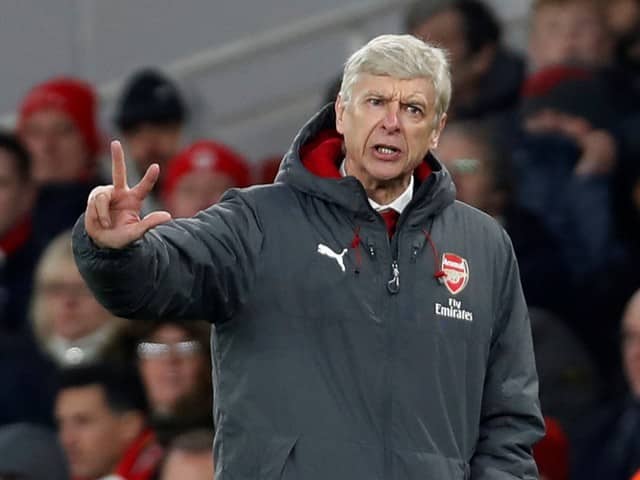 After a week in which two 3-0 defeats by Manchester City highlighted the gulf between Arsenal and the Premier League champions-elect, Sunday’s loss at Brighton suggested even the Gunners’ membership of the “Big Six” is in question.

The focus is again on the future of French manager Arsene Wenger, but whether he sees out the remaining year of his contract or steps down at the end of this campaign, it is clear the North London side need a major overhaul.

Arsenal are closer to seventh-placed Burnley than they are to fifth-placed Chelsea.

Worse than the statistics is the clear sense that Spurs, Liverpool and Manchester United are improving, evolving into quality teams who can compete at the highest level in Europe and with the potential to give City a real challenge next season.

Arsenal, in contrast, are drifting, still with more quality than the likes of Burnley and Leicester City, but no longer with the aura of a team that is part of the elite group.

Those questioning Wenger’s suitability are no longer restricted to the hardcore of hostile Arsenal fans who have long campaigned for him to leave the club where he won three Premier League titles and seven FA Cups in his 21 years in charge.

Former Liverpool manager Graeme Souness, now a pundit with Sky Sports, is one of those who believes the club need a change of helmsman.

“He is responsible for every single decision at Arsenal and he has to hold his hands up and I think it is time for another voice. I come from a generation where Arsenal were a very special football club and they have slipped a long way from that,” he said.

“All the players are there because he wanted them there. For whatever reason a lot of them have not been anywhere good enough for Arsenal and the message is not getting across to them anymore.”

But whether chief executive Ivan Gazidis or American owner Stan Kroenke decide to pull the trigger or allow Wenger to see out the remaining 12 months of his contract, the same problem will confront them.

Can Arsenal, without a Premier League title in 14 years, still attract the calibre of manager capable of bringing in top talent and transforming the team into one which can compete with Pep Guardiola’s City in the near future?

The bookmakers’ favourite for the job is Italian Carlo Ancelotti, the former AC Milan, Real Madrid and Bayern Munich boss.

But while the 58-year-old has vast experience at the highest level, including winning the Premier League in 2010 with Chelsea, and he is available, his strength has been more in managing established top teams than leading clubs out of mediocrity.

Another Italian, Massimiliano Allegri, has been linked with the position but is unlikely to see the Gunners as a step up from his current role with Italian champions Juventus.

The same could be said for Diego Simeone, the Argentine coach of Atletico Madrid. The former Lazio midfielder would be the kind of character who could galvanise a squad but is he ready to take on a major rebuilding job when he could have the chance elsewhere to compete immediately for honours?

Perhaps the most intriguing name to be mentioned as a possible Wenger replacement is Germany coach Joachim Loew.

Arsenal have taken a German turn by appointing Sven Mislintat as chief scout after he spent 10 years with Borussia Dortmund.

The behind the scenes changes included the appointment of Raul Sanllehi, formerly Barcelona’s director of football, which could indicate that out-of-work ex-Barca coach Luis Enrique could be a target.

Whenever the change is made, however, the performances of the team this season suggest an instant turnaround is unlikely.

In a game that demands quick success, Wenger’s replacement will need patience from the fans and consistent support from his employers and that, in football, is often hard to secure.