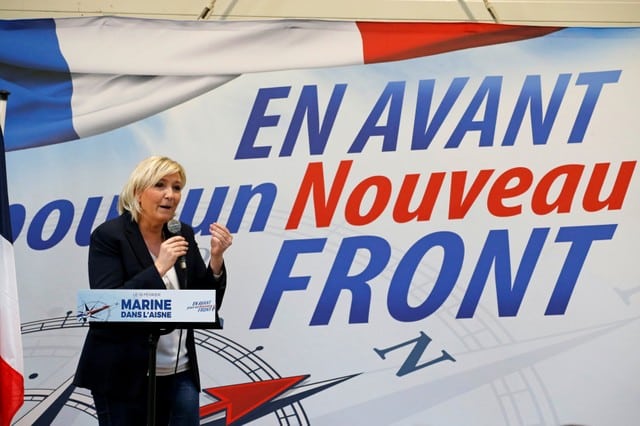 French far-right leader Marine Le Pen will this weekend unveil a new name for the 45-year-old National Front and a refocus on immigration as it searches for more voters and relevance in a political landscape transformed by President Emmanuel Macron.

At the helm of the National Front (FN) since 2011, Le Pen has taken it further than her maverick father, FN founder Jean-Marie Le Pen, ever did, winning municipalities and EU elections by making the party more palatable to mainstream voters.

But a disastrous TV debate before last year’s presidential run-off against Macron, a lower-than-expected score in that second round and a disappointing number – eight – of FN lawmakers elected afterwards, shook Le Pen and the party.

She quickly pledged to overhaul the FN. And an FN congress on March 10-11 will be a chance for her to reassert her leadership and win approval for a shift away from the unpopular anti-euro focus of her presidential run to better take on conservative Les Republicains leader Laurent Wauquiez.

“In France, there is a habit of announcing our death as soon as we’re somewhat weakened. But each time they buried us, we came back stronger,” said Le Pen, 49, who got 33.9 percent of the vote in the presidential run-off.

“The name change will mark the end of a chapter and the start of a new one, that of a party suited to being in power and striking alliances,” she told the APE foreign press association last month.

While Jean Marie Le Pen has warned that altering such a well-known brand could be political suicide, local FN officials said their experience on the ground argued strongly for such a move.

“The name change is essential to enable us to strike alliances and talk with voters without what is often an almost automatic negative reaction,” said Davy Rodriguez, the 24-year-old deputy head of the National Front’s youth movement.

The National Front brand remains very much associated in many voters’ minds with Le Pen’s firebrand father, who has been convicted several times for incitement to racial hatred.

The second key aspect of the FN rebranding is, as other European far-right parties have done, a watering down of its stance against the European Union’s common currency.

Though popular with the FN’s core electorate, anti-euro campaigning has proved a turnoff for most French voters.

“We’re keeping our fundamentals, our basis: security, immigration,” said FN lawmaker and party spokesman Sebastien Chenu. “But new faces will appear, and we have changed our line on Europe, on the euro.”

The objective is to break the FN’s isolation from the mainstream. Le Pen seeks to head a more inclusive “patriotic” camp as small and large parties alike scramble to reinvent themselves after the unprecedented election victory of newcomer Macron’s neither-left-nor-right recipe for politics.

Macron defeated long-established left and right parties by pledging reforms, particularly to liberalise the economy and rigid labour laws, based on pragmatism rather than ideology.

Le Pen counters: “Macron gathered around him a hub of shameless globalists … It’s time for those who defend the nation to get together.”

Among potential allies she is sizing up is Nicolas Dupont-Aignan, leader of a small nationalist party who backed Le Pen between the two rounds of the presidential election, and others heading fringe right-wing parties. FN officials say the party will also pursue case-by-case deals for local elections with conservatives or others without a political affiliation.

The question is whether this will yield significant gains at the ballot box, especially at a time when Wauquiez is openly targeting FN voters. He has dismissed Macron as out of touch with ruralFrance, weak on security and overly in favour of closer EU integration – all hot button issues for the FN.

Doubts about Le Pen’s capacity to broaden the FN’s popular base more than she already has may be hard to overcome, say analysts and even some party sympathisers.

“Maybe Le Pen’s name is putting off some people. I wouldn’t mind that much if she resigned,” 16-year-old Enzo Niant said at a Le Pen rally in the northeastern region of Alsace last month.

“Part of the FN’s rank and file doubt she can live up to their expectations,” said Ifop analyst Jerome Fourquet.

But Le Pen’s FN is likely to be a force to be reckoned with against Macron in coming years, most analysts say.

“The inequalities and anger that are at the heart of the FN vote will not go away,” said Fourquet, citing worries about losses of famously secure French jobs to globalisation, Europe’s migrant crisis and the Islamist militant threat.

US aircraft carrier arrives in Vietnam on landmark visit

Brush strokes us to Wonderland