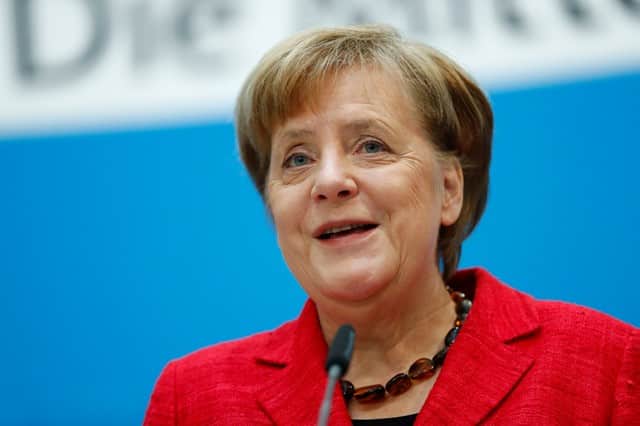 Chancellor Angela Merkel said on Monday she would work with France to tackle pressing issues such as trade policy, the war in Syria and competition with China after the Social Democrats (SPD) approved joining a coalition with her conservatives.

Merkel welcomed the vote by a clear majority of SPD members that ended more than five months of political deadlock in Europe’s largest economy after an inconclusive election, and she said the right-left government must quickly get to work.

“What we’re seeing and hearing everyday is that Europe needs to step up and Germany needs to have a strong voice there along with France and other member states (of the European Union),” said Merkel during a brief statement to reporters.

“This includes the very current issue of international trade policy on which many jobs depend here, the question of openness of competition with China and questions of peace and war like the scary situation in Syria,” she said.

“This means it is important that we start working as soon as possible.”

US President Donald Trump last week stunned his European allies with plans to put tariffs on steel and aluminum imports, triggering a warning by the European Union that it would retaliate with counter-measures.

The result of the SPD vote announced on Sunday brought relief to both German businesses and European capitals, which believe the eurozone would benefit from Merkel now being able to partner with France on President Emmanuel Macron’s ambitious plans to reform the single currency bloc.

But discord within the coalition could hamper Merkel’s ability to tackle challenges like euro zone reforms, Trump’s protectionist policies, China’s rising dominance and the war in Syria, which could translate into more refugees arriving in Germany.

Both Merkel’s conservatives and the SPD are under pressure to appear distinctive to voters in a coalition borne out of necessity rather than choice, making it difficult for Merkel to balance conflicting demands.

Senior conservative Jens Spahn, seen as one possible successor to Merkel, warned the SPD on Monday against obstructing government policy in a re-run of the coalition that has ruled since 2013.

‘NO OPPOSITION IN GOVERNMENT’

Spahn, a member of Merkel’s Christian Democrats (CDU) who does not shy away from criticising the chancellor, told the Deutschlandfunk public broadcaster: “The SPD must decide: either we rule together or some will try to play opposition within the government.”

SPD leaders, who reversed a decision to go into opposition and are under pressure to rejuvenate their party after suffering their worst result in September’s election since Germany became a federal republic in 1949, have vowed to fight the conservatives on major issues.

SPD secretary general Lars Klingbeil said his party wants the government, expected to be in place this month, to make social issues its top priority.

“Pension, family and education policy as well as the question of how we strengthen rural areas, those are the issues we want to tackle,” he told the ARD broadcaster. “We will for sure initiate critical debate within the government.”

But Volker Kauder, parliamentary leader of the conservatives, said his bloc would put curbing immigration first.

Despite agreeing on broad policy outlines, the two blocs remain divided on how to implement policies on immigration, car emissions, labour rules and welfare.

Merkel was weakened by her decision in 2015 to welcome hundreds of thousands of people seeking asylum, which contributed to the rise of a far-right party that stole conservative voters.

In power since 2005, she has led Germany and the European Union through the financial and debt crises, but her waning authority at home could complicate efforts to deepen integration in the euro zone.

Under pressure after the election, she appointed younger conservatives to leadership roles, including naming Spahn as health minister and backing close ally Annegret Kramp-Karrenbauer to take over as secretary general of the CDU.

Number of unemployed drops in February