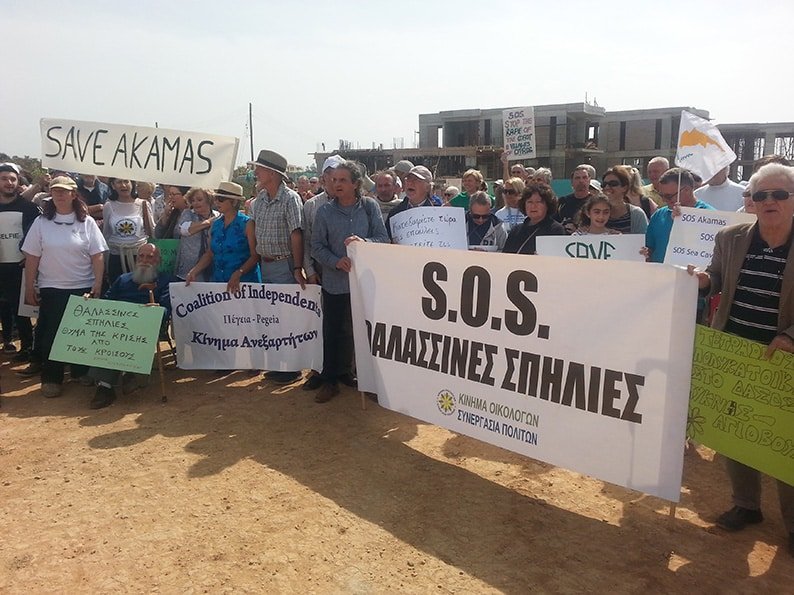 Protesters at the site on Sunday

MORE than two hundred people from around the island turned out to support a demonstration held at the protected sea caves area in Peyia on Sunday morning.

Organised by the Green party, the demonstration opposed building development near the sea caves, (which has been granted permits), and other protected areas. It is the second to be held at the site in a matter of days.

Last Wednesday, a protest organised by Save Akamas/Save Cyprus outside parliament in Nicosia was also supported by a large number of environmentalist groups, and around eighty protesters also gathered at the sea caves at the same time.

Participants are angered over construction and development at some of the island’s protected Natura 2000 sites.

In particular, outrage is being expressed at the ongoing construction of six villas in the Peyia sea caves area, a birthing habitat of the Mediterranean monk seal (Monachus monachus), which is an endangered species.

Andreas Evlavis of the Paphos Green party told the Cyprus Mail that this is just one of the developments in the area which is detrimental to the environment.

“Our demonstration on Sunday showed that the six villas are not our only target, but all of the damage that has taken place here in the last years.”

He said that the breaking of huge boulders, the creation of a beach and other buildings in the area have all contributed.

“There is also a plan for an eight storey hotel and forty four villas to be built here. The entire area will be blocked and we are making noise and raising the alarm now before it’s too late,” he said.

In addition, he noted that just before the protest, ‘unknown’ people closed the main road that leads down to the coast and developers sent staff to cover up their billboards and signs. The protest was well covered by national television and other media.

“If everything is OK why was this done? There are questions which someone must answer and people are playing games. What has happened at the sea caves is not a game,” he stressed.

Peyia councillor, Linda Leblanc has long supported the protection of the sea caves and the wider Akamas region and said that actions showed that the demonstrations are provoking a reaction.

For some time, Peyia council has unsuccessfully tried to get the developer to clear the area of various construction materials dumped within the coastal protection zone, she said.

“The day before the demonstration, illegal dumping in the coastal protection zone by the developer saw nonstop trucks at the site removing huge mounds of earth, some of which was falling into the sea below, as well as building materials and other construction paraphernalia,” she said.

Leblanc also confirmed that in addition, a number of advertising hoardings were taken down or covered up. She said that ‘people action’ brings results and that pressure needs to be kept up to ensure that the environment is protected and laws adhered to.

“It is possible that these villas will be demolished, I hope so, the EU provides for that,” she said.

The island’s Technical Chamber, Etek has requested a review of all the permits given in sensitive areas in the past and an investigation into how the area was included in a development zone.

The councillor noted that the aim is to ensure that there is a complete halt to ongoing construction at the site while a thorough investigation into the zoning changes, how permits were issued etc., is launched.

“It needs to be researched thoroughly and if illegalities and practices contravene the EU and Cyprus laws, then it needs to be demolished and the site restored,” she said.

Leblanc said that members of the public may download a copy of the petition at the ‘Pegeia coalition of Independents’ Facebook page and help to collect signatures.

“It will later be presented to the government,” she said.