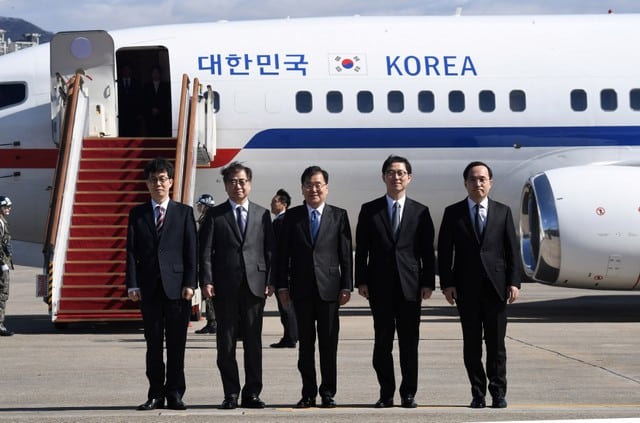 Chung Eui-yong, head of the presidential National Security Office, Suh Hoon, chief of the South's National Intelligence Service, and other members of South Korean delegation pose before boarding an aircraft as they leave for Pyongyang at a military airport in Seongnam, south of Seoul, South Korea

A South Korean delegation left for North Korea on Monday, a presidential official said, aiming to bring the North and the United States together for talks in a bid to rein in the North’s nuclear and missile programmes.

Both North Korea and the United States have expressed willingness to talk, but US President Donald Trump demands the North “denuke” first.

The North, which has vowed never to give up its nuclear deterrent against US hostility, says it will not sit down to talks under preconditions.

Reclusive North Korea, which has made no secret of its pursuit of a nuclear-tipped missile capable of reaching the mainland United States in defiance of UN Security Council resolutions, is also concerned over a joint US-South Korea military exercise, which it sees as a preparation for war.

South Korean officials have said the drill will start next month as planned, after being postponed for the Winter Olympics held last month in the South.

The 10-member South Korean delegation, headed by National Security Office head Chung Eui-yong, left from Seoul Air Base in Seongnam, near the capital, the official said, on condition of anonymity.

“We will deliver President Moon Jae-in’s wish to bring about denuclearisation of the Korean peninsula and permanent peace by extending the goodwill and better inter-Korean relations created by the Pyeongchang Winter Olympics,” Chung said at the presidential Blue House before he left.

The delegation hopes to speak with North Korean officials on starting dialogue between the North and the United States as well as other countries, he added.

The delegation is expected to attend a dinner with North Korean officials on Monday, with another meeting set for early Tuesday, said another administration official, who sought anonymity because of the sensitivity of the situation.

Officials at the Blue House said they were unsure whether or when the North’s leader, Kim Jong Un, would meet the delegation.

Thawing relations between the neighbours have prompted speculation of future direct talks between Washington and Pyongyang after months of tension and exchanges of bellicose insults between Trump and Kim Jong Un fuelled fears of war.

North Korea has not carried out any weapons tests since late November, when it tested its largest intercontinental ballistic missile. Inter-Korean talks began after Kim Jong Un said in his New Year’s address that he wanted to engage the South.

Pyongyang has since sent athletes to participate in the Olympics, as well as a high-ranking delegation that included Kim’s sister, Kim Yo Jong.

Impoverished North Korea and the rich, democratic South are technically still at war because their 1950-53 conflict ended in a truce, not a peace treaty.

The North regularly threatens to destroy the South and its main ally, the United States, which stations 28,500 troops in the South, a legacy of the Korean War, and carries out regular joint military exercises.

“Neither sanctions nor provocations nor threats can ever undermine our position of a nuclear weapons state,” the North’s Rodong Sinmun newspaper said recently.

“Hoping that the DPRK would abandon its nuclear programmes is as foolish an act as trying to wish seas to get dried up,” it said, referring to itself by its official name, the Democratic People’s Republic of Korea.

High levels of dust set to last till Thursday