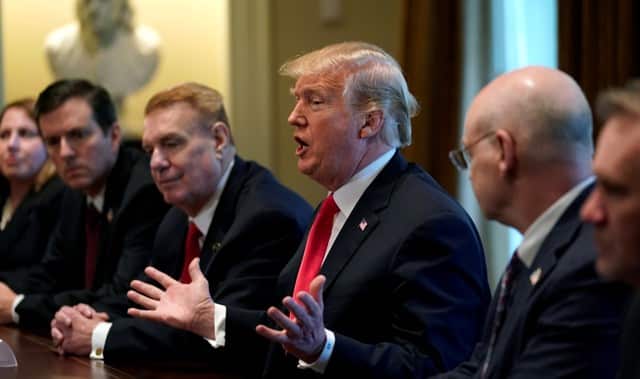 US President Donald Trump on Monday appeared to suggest that Canada and Mexico could win exemptions to his planned sweeping tariffs on steel and aluminium if the two countries sign a new Nafta trade deal and take other steps.

He made the comments as the United States, Canada and Mexico were wrapping up their latest round of talks on revamping the 1994 Nafta deal, and as world shares dipped again, partly on concerns that Trump’s tariff plan could spark a global trade war.

“We have large trade deficits with Mexico and Canada. Nafta, which is under renegotiation right now, has been a bad deal for USA Massive relocation of companies & jobs. Tariffs on Steel and Aluminum will only come off if new & fair Nafta agreement is signed,” Trump tweeted.

A representative for the White House did not immediately respond to a request for comment on the president’s statement.

Trump has touted the planned tariffs, which he announced last Thursday, as a way to revive the US steel and aluminium industries. This point was repeated on Monday by White House Director of Trade and Industrial Policy Peter Navarro, who told Fox News, “As the president said, we can’t have a country without an aluminum and steel industry.

However, Navarro indicated he had not seen Trump’s tweets on Canada and Mexico being exempted if a Nafta deal was achieved.

“That would be a great thing for the American people, but at this point in time 25 per cent on steel, 10 per cent on aluminum, no country exclusions – firm line in the sand,” Navarro said.

Trump, a Republican, has long bucked his party’s broad support for free trade, promising both on the campaign trail and in the White House that he will seek deals that better favour American workers.

That has included the threat that Washington will withdraw from the North American Free Trade Agreement if it is not satisfactorily renegotiated, and his unexpected, market-rattling announcement of plans for hefty tariffs on steel and aluminium imports.

Trump is expected to finalise the tariffs later in the week, posing a tough challenge for US Trade Representative Robert Lighthizer, Canada’s Foreign Minister Chrystia Freeland and Mexican Economy Minister Ildefonso Guajardo. They are meeting in Mexico City on Monday to wrap up the latest round of discussions.

In another comment on the talks tweeted on Monday, Trump reprised two running criticisms of Canada and Mexico.

“Also, Canada must treat our farmers much better. Highly restrictive. Mexico must do much more on stopping drugs from pouring into the US. They have not done what needs to be done. Millions of people addicted and dying.”

The Mexican and Canadian ministers are likely to press Trump’s trade envoy for more details on how their countries could be excluded from the blanket tariffs.

Officials have so far been evasive when asked how the three nations can continue trying to update Nafta at a time when the US president is about to take a highly protectionist measure.

On global markets, shares slipped for the fifth straight day on Monday and emerging markets weakened sharply, hit by the prospect of a global trade war and political instability in Europe after Italy’s inconclusive weekend election.

While most markets stabilised after sharp losses early in the day, assets considered low-risk – including gold, the yen and German bonds – remained in demand, with yields on the latter at the lowest in a month.

Recent events have again put equity markets, barely recovered from their February selloff, under a cloud. The European Union, Canada and China are among those threatening to retaliate with tit-for-tat duties if Trump goes ahead with the steel and aluminium tariffs.