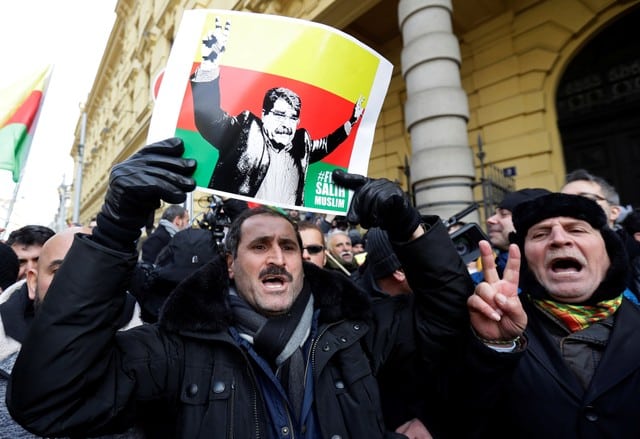 Turkey has issued a second extradition request for Syrian Kurdish leader Saleh Muslim, calling for his temporary detention and extradition from Germany, Turkish state media said on Monday, after a Czech court released him last week.

Muslim, who formerly headed the PYD, Syria’s main Kurdish party, was detained in Prague last week at Turkey‘s request. Ankara considers the PYD a terrorist organisation and says Muslim is linked to two bombings in the capital Ankara that killed dozens.

A Czech court later ruled for his release, a move Turkey described as political, against international law and “clear support for terror”. Ankara has said it would pursue Muslim “wherever he goes”.

Muslim has said the allegations are false. He has also said he will remain in European Union territory and cooperate in any further proceedings.

State-run Anadolu news agency said Ankara had requested Muslim’s temporary detention and extradition from Germany on Friday. He spoke at a rally in Berlin on Saturday, according to other Turkish media.

Turkey considers the PYD and its YPG armed wing to be extensions of the outlawed Kurdistan Workers Party, which has waged a three-decade insurgency in Turkey‘s largely Kurdish southeast.

Ankara launched a military operation inside Syria six weeks ago to sweep YPG fighters from its southern border.

Relations between Turkey and Europe have soured in the aftermath of a 2016 failed coup, as President Tayyip Erdogan has overseen a sweeping crackdown. More than 150,000 people have been sacked or suspended from their jobs, and more than 50,000 detained. Turkey says the measures are necessary for its security.

A Turkish court last month freed a German-Turkish journalist pending trial after indicting him for alleged security offences, a move that had been seen as potentially leading to an easing of tensions between the two Nato allies.

Apoel and Apollon surge ahead