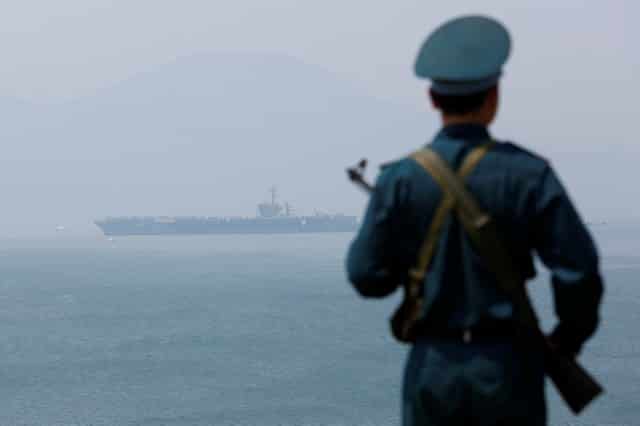 A Vietnamese soldier keeps watch in front of US aircraft carrier USS Carl Vinson after its arrival at a port in Danang, Vietnam

A US aircraft carrier arrived in Vietnam on Monday for the first time since the end of the Vietnam War, dramatically underscoring the growing strategic ties between the former foes at a time when China’s regional influence is rising.

The grey and imposing silhouette of the USS Carl Vinson could be seen on Monday morning from the cliff tops just outside the central Vietnamese city of Danang, where the 103,000-tonne carrier and two other US ships begin a five-day visit.

“The visit marks an enormously significant milestone in our bilateral relations and demonstrates US support for a strong, prosperous, and independent Vietnam,” Daniel Kritenbrink, the US ambassador to Vietnam, said in a statement.

“Through hard work, mutual respect, and by continuing to address the past while we work toward a better future, we have gone from former enemies to close partners.”

The arrival of the Vinson marks the biggest US military presence in Vietnam since 1975 – but it also illustrates Hanoi’s complex and evolving relationship with Beijing over the disputed South China Sea.

Vietnamese envoys had been working for months to ease the concerns of their giant Chinese neighbour over the visit and the prospect of broader security cooperation between Hanoi and Washington, according to diplomats and others familiar with the talks.

U.S. carriers frequently ply the South China Sea in a rising pattern of naval deployments, and are now routinely shadowed by Chinese naval vessels, naval officers in the region say.

China’s rapid construction and build-up of the land it holds in the disputed Spratly islands group has alarmed Vietnam and other regional governments as it seeks to enforce its claims to much of the disputed waterway, through which some $3 trillion in trade passes each year.

While some Chinese commentators have used the Vinson’s presence to demand an even greater Chinese military build-up in the South China Sea, official reaction from Beijing has been relatively muted since the stop was announced in January.

That announcement came during a two-day visit to Hanoi by US Defence Secretary James Mattis and followed months of backroom military diplomacy between Hanoi and the Pentagon.

Although no US aircraft carrier has been to Vietnam since the end of the war, other, smaller US warships have made high-level visits as ties improved in recent years.

A US Navy band will play a concert in Danang during the Vinson’s visit, and sailors from the carrier are scheduled to spend time at a treatment centre for people who were exposed to Agent Orange chemicals during the war.