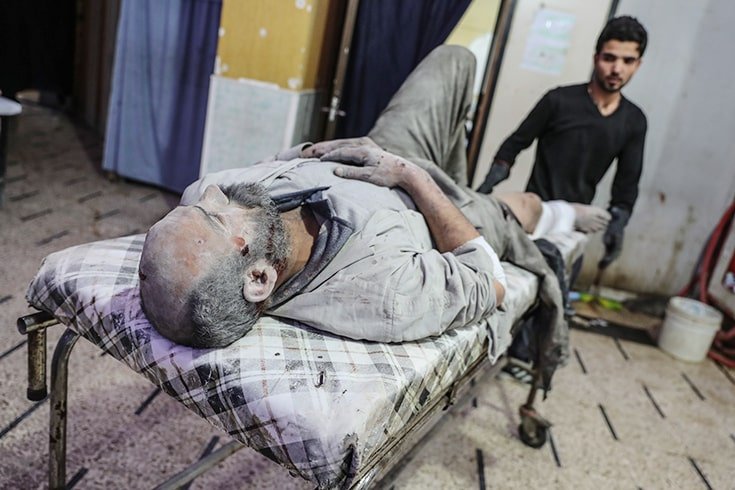 A man injured in shelling lies in a hospital in Douma, Eastern Ghouta

In the past two weeks of heavy fighting, Syrian government forces have taken back about a quarter of the rebel-held Eastern Ghouta enclave, but you won’t have heard much about that. Whereas you will have heard a great deal (unless you are trapped down a coal-mine) about the ‘massive bombing campaign’ that has allegedly killed 500 innocent people there in the past week.

It is “hell on earth” in the Eastern Ghouta, said United Nations Secretary-General Antonio Guterres, and you may have seen video clips of some of the victims of the bombing (always including women and children). You will not, however, have seen any footage of armed rebels belonging to various Islamist groups, although they are there in large numbers.

You will probably have heard at some point that 393,000 people are trapped in this rebel enclave on the eastern edge of Damascus, Syria’s capital, and you may even have wondered who counted them? That was the area’s population seven years ago, at the start of the Syrian civil war, but until about a year ago it was very easy for people to leave. Most probably did.

Civilians can’t leave now, mainly because the rebel fighters won’t let them: they need the civilians as shields against even heavier bombardments by government forces.

Maybe government troops are stopping them from leaving too – decisions are not always rational seven years into a civil war – but that would not make sense from a tactical or a propaganda standpoint.
At any rate, Bashar al-Assad’s troops and aircraft are not being deterred by the presence of civilians who may or may not be hostages. The offensive continues, including the bombing. If it follows the same course as the government siege of rebel-held eastern Aleppo in late 2016, the Eastern Ghouta enclave should fall towards the end of this month.

At that point, if the siege of eastern Aleppo is any guide, there will be no massacre of civilians (who will again turn out to be around a quarter of the number claimed to be present during the siege). The remaining fighters will be allowed to surrender and may be transported to some other rebel-held enclave, although those are dwindling in number. And Damascus will be free of bombardment for the first time since 2012.

Sieges of cities are always dreadful events. They involve close-quarters combat in the midst of a civilian population. Street-fighting eats up soldiers’ lives faster than any other kind of combat, so the side that has access to massive amounts of firepower (generally the attackers) deploys it ruthlessly to keep its own military casualties down.

In terms of the scale of the bombardment, Eastern Ghouta is no different from Eastern Aleppo – nor indeed from Mosul in northern Iraq, which was retaken from Islamic State forces last year by US-backed Iraqi troops after a brutal, grinding nine-month battle. Indeed, the worst of the three sieges, in terms of civilian casualties, was almost certainly Mosul.

We heard less about civilian casualties in Mosul, however, because most international news providers are based in Western countries that backed that operation, and many of the aircraft doing the bombing were American. (Belgian, British, French, Iranian and Iraqi aircraft were also involved.)

We hear much more about the bombing in Eastern Ghouta because the planes involved belong to the Syrian regime and perhaps to its Russian backers (although Moscow denies that). The reporting is utterly partisan and therefore completely unreliable.

None of this constitutes a defence of the Syrian regime, whose behaviour before and during this civil war has been indefensible. Indeed, there is reason to suspect that the Baathists’ decision to release more than a thousand Islamist radicals from prison when non-violent protests first broke out in 2011 was designed to turn the revolution into a civil war against extremist Sunni ‘terrorists’ that the regime would stand a chance of winning.

That’s what happened, in any case, and now, with the help of Russia and Iran, the regime has won. More fighting will not change the outcome; it will merely prolong the agony.

It also carries the risk that there will be a clash between the major foreign powers who now have troops in the country, including Turkey and the United States.

The humanitarian thing to do now would be to negotiate a ceasefire that acknowledged Assad’s control of the country but gave refuge to all those who do not wish to live under his rule. That’s impossible, however, because nobody wants to accept more Syrian refugees, and especially not the Islamist leaders who now command almost all the rebel forces.

So the war must go on, one bitter step at a time, until all of Syria that is not occupied by American or Turkish forces is back under Damascus’s rule. And then, unless they decide to partition Syria, the Americans and the Turks will have to be persuaded to leave.

Our View: Selling golden visas could prove a risky business