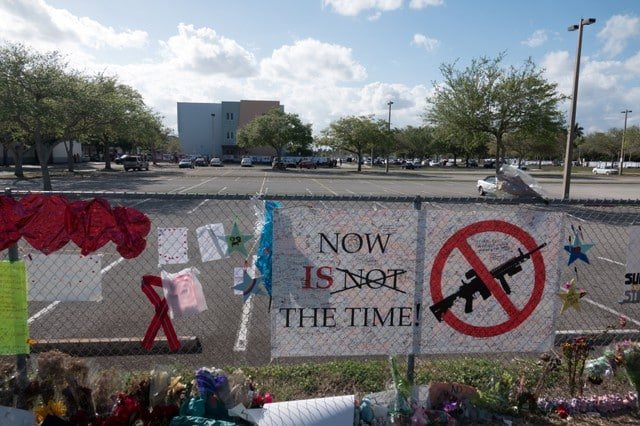 Messages, posted on a fence, hang at the Marjory Stoneman Douglas High School

Florida‘s Republican-controlled senate approved sweeping reforms to the state’s gun law on Monday that raise the minimum purchase age and add a three-day waiting period in response to the deadliest high school shooting in US history last month.

Senators approved the legislation after an amendment removed a provision to arm most teachers. That was designed in part to increase support from many parents, law enforcement officials and lawmakers in both parties – including Republican Governor Rick Scott – who objected to the idea.

The exclusion was adopted by voice vote as part of a package of legislation the senate passed a short time later, 20-18, to raise the minimum legal age for buying all guns in Florida to 21 and impose a three-day waiting period for any gun purchase.

The bill now moves to Florida‘s Republican-controlled House of Representatives.

The minimum age for handguns nationally is already 21. However, a person can be as young as 18 to buy a rifle in Florida, with no waiting period.

The legislation comes about a month after a gunman walked into Marjory Stoneman Douglas High School in Parkland, Florida, with a semi-automatic AR-15-style assault rifle and opened fire, killing 17 students and staff members.

The man accused of the massacre was 18 when he legally purchased the rifle he used, authorities said.

The bill passed by the senate represents a break with the National Rifle Association (NRA) gun rights lobby, which has resisted proposals to raise age limits or impose new waiting limits.

A House committee approved similar legislation last week, including a provision allowing sheriffs to create voluntary programmes for deputising school personnel as armed “marshals,” subject to school district approval and special training. US President Donald Trump has voiced support for such a plan, also advocated by the NRA.

Under the amended senate bill, classroom teachers would be excluded from carrying guns to work unless they were part of the Junior Reserve Officers’ Training Corps program or members of the US military or former police officers. Other school personnel would be eligible to participate.

A spokeswoman for the governor said Scott, who was endorsed by the NRA and received its highest rating for supporting gun rights, would review the bill in its final form before deciding whether to support or oppose it.

“The governor is against arming teachers,” spokeswoman Lauren Schenone said. Scott “still has concerns” with the three-day waiting period, which he has opposed in the past, she said.

The Florida Senate rejected an amendment to ban assault weapons at the weekend.

The Senate bill as it was passed echoes a number of other proposals endorsed by Scott after the Feb 14 massacre, including new powers for police to temporarily seize guns from people involuntarily committed or deemed by a court a danger to themselves or others.

It also allows police to petition a court for a “risk-protection” order barring an individual from possessing firearms if that person is judged as dangerous because of a mental illness or violent behavior.

Authorities have said the accused Parkland gunman, Nikolas Cruz, had a history of mental issues, numerous encounters with police and was expelled from the high school last year for unspecified disciplinary problems.

Federal and state law enforcement have also acknowledged receiving multiple warnings about his potential for violence before the shooting.

A group of parents from Stoneman Douglas High held a news conference outside the school on Monday urging legislators to enact meaningful legislation in time for adjournment on Friday.

Max Schachter, whose son was among those killed in Parkland, said parents hosted a meeting of 25 law enforcement officials and other experts from across the country to discuss school safety, and all opposed arming teachers.

“Not a single expert said that was a good idea,” Schachter said.