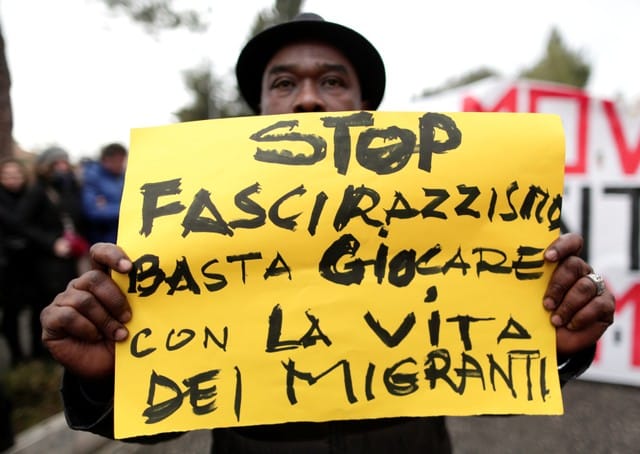 A demonstrator holds a banner reading 'Stop fascism and racism: stop playing with migrants' life' during an anti-racism rally in Macerata, Italy, February 10, 2018

African immigrants marched through the streets of central Florence late on Monday chanting “no more racism” after an Italian man shot dead a Senegalese street vendor earlier in the day.

Police said Roberto Pirrone had fired six pistol shots at close range, killing Idy Dienec as he sold leather bags, umbrellas and trinkets on a bridge in the Tuscan city, one of Italy’s most popular tourist destinations.

The shooting came a day after a parliamentary election in which politicians often portrayed migrants as criminals and called for mass deportations.

Police told Reuters on Tuesday that the murder was not racially motivated, citing testimony Pirrone gave to investigators after his arrest. Pirrone, who had a license to carry a weapon for sport, was suicidal and lashed out in a state of confusion, investigators said.

But the timing of the attack raised suspicions among Florence’s large Senegalese community.

In the election, the anti-immigrant League became the second-biggest party in parliament.

“The fact that the elections went the way they did shows the kind of mood the country is in,” said Pape Diaw, a representative of the Senegalese community, before the march. “Italy has become a country where blacks are shot on the street.”

Last month a man with neo-Nazi sympathies and ties to the League opened fire on African migrants in the city of Macerata, wounding six before he was captured.

Dienec, the 54-year-old victim of Monday’s attack, had legally lived in Italy for many years, police said. But more than 600,000 boat migrants have arrived on Italian shores in the past four years, making immigration a top concern for voters during the campaign.

The League and the 5-Star Movement, which emerged as the largest party in the vote, both have promised to ramp up deportations of irregular migrants.

Monday’s shooting is not the first targeting African vendors in Florence. Six years ago, an Italian right-wing extremist shot dead two street sellers and wounded three others in a racist rampage.

Over 20 migrants ‘likely dead’ on trip from Libya to Italy