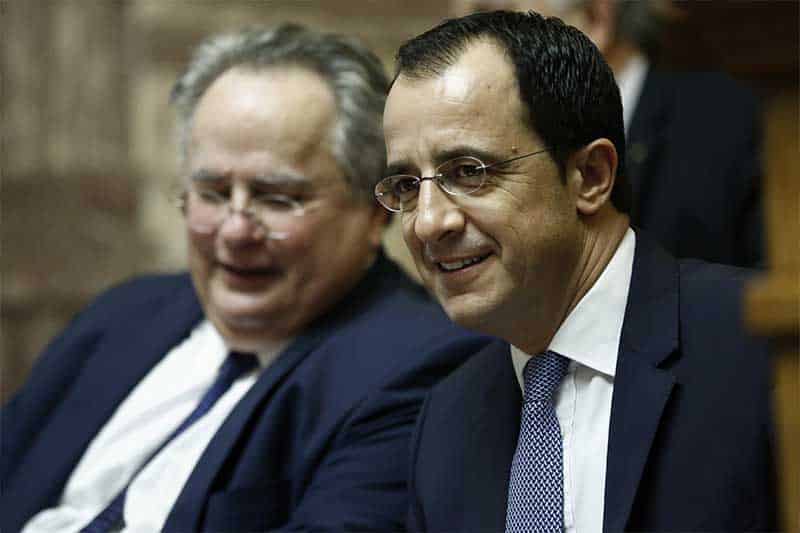 Christodoulides and Kotzias at the Greek parliament

Turkey’s provocations in Cyprus’ EEZ were at the forefront of Foreign Minister Nicos Christodoulides’ meeting with Greek Prime Minister Alexis Tsipras in Athens on Tuesday.

During their meeting the two discussed the diplomatic steps Nicosia and Athens could take in response to the Turkish provocations in both the Cypriot EEZ and the Aegean.

Following his meeting with Tsipras, Christodoulides attended a meeting of the Greek Parliament’s Foreign and Defence Affairs Committee with his counterpart Nikos Kotzias.

During the meeting Christdoulides told members of the committee that the Cypriot government’s ultimate goal is the settlement of the Cyprus problem, by making attempts to restart the dialogue between President Nicos Anastasiades and Turkish Cypriot leader Mustafa Akinci.

The foreign minister said there is a proposal to restart talks on the internal matters of the Cyprus issue, in preparation for an International Conference with the participation of the five permanent members of the UN Security Council.

Regarding the Turkish provocations in the EEZ, he said that both in Nicosia and the international community there are concerns regarding Turkey’s willingness and readiness to restart the Cyprus talks.

Christodoulides also informed the Greek parliamentary committee on the search for natural gas in block 10 of the island’s EEZ, noting that it is believed to be one of the most promising areas, which is why it garnered the interests of large multi-national companies.

Earlier, the Cypriot Foreign Minister met Greek President Prokopis Pavlopoulos. During their meeting Pavlopoulos said that Turkey “is wholly obligated to respect international law, and specifically the Law of the Seas.

“Turkey should know that when it violates the law of the seas, it is violating international law, but is also violating the obligations it has towards the EU itself,” Pavlopoulos said about Ankara’s provocations.

On his part Christodoulides noted that Nicosia will not be swayed by Turkey’s actions, saying that the “number one goal is the reunification of the country.”

He added that he had agreed with his Greek counterpart Nikos Kotzias to raise the issue of the violation of the rights of the Republic in Brussels.

He also expressed satisfaction that Turkey’s provocations would be on the agenda of the European Council in March.

Akel Secretary General Andros Kyprianou was also in Athens on Tuesday, and had meetings with Pavlopoulos and the head of the Greek Parliament Nikos Voutsis. Kyprianou said he believed it was best to discuss with the Greek political leadership as “they are our main support in the struggle to free and reunify our country.”