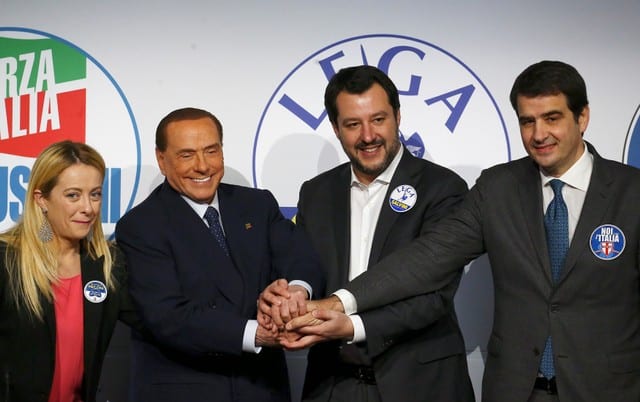 Italy‘s ex-premier Silvio Berlusconi said on Wednesday his party would back the far-right League in attempts to form a government, as an anti-establishment rival reaffirmed its claim to call the shots in any new coalition.

No party or bloc won an absolute majority in Sunday’s national election, leaving the country mired in political uncertainty as EU authorities said urgent action was needed to put its teetering economy back on an even keel.

An alliance of centre-right and far-right groups won the most parliamentary seats, with the eurosceptic, anti-migrant, League for the first time gaining more votes than Berlusconi’s more moderate Forza Italia (Go Italy!).

The octogenarian media magnate insisted his allies be given first chance to govern, while acknowledging that Forza Italia was no longer the kingpin on the right.

“In full respect of our agreements, we will now loyally support attempts by (League leader Matteo) Salvini to form a government,” Berlusconi told Corriere della Sera.

“I am here to support him, to guarantee the solidity of the coalition and keep our commitments with the voters.”

The anti-system 5-Star movement established itself as by far the most popular party, however, and its leader staked a fresh claim to take the helm of the country.

“Politics must stop being arrogant and start to be humble,” Di Maio wrote in la Repubblica newspaper. “The importance of this vote is enormous and marks a sea change with everything that has gone before.”

An opinion poll published by La7 television said 40 per cent of people wanted Di Maio to be entrusted by the head of state with forming a new government. Only 21 per cent backed Salvini.

President Sergio Mattarella is not expected to start formal government consultations until next month.

Meanwhile in Brussels, the European Commission said Italy, with its large debt and weak banking sector, was among three EU states experiencing “excessive” economic imbalances that might impinge on other parts of the bloc.

As part of regular monitoring of European economies, the Commission welcomed reform efforts, especially in the banking sector, by Italy‘s outgoing, centre-left government

But, without commenting directly on Sunday’s election or its outcome, the EU executive noted in its report that “reform momentum has somehow slowed”.

Both the League and 5-Star promoted free-spending policies on the campaign trail, and concerns that they might loosen the domestic purse strings if they took office drove a sell-off of Italian assets on Monday.

The position of the defeated Democratic Party (PD), which led the outgoing government, could yet prove pivotal because it will have numbers in the new parliament to become prospective kingmaker for either the right or 5-Star.

PD leader Matteo Renzi has said he will resign but has also sought to lay down his party’s future path – saying it would move into opposition and shun any tie-ups with either party.

Some PD heavyweights bristled at this and said the party should be open to talks with 5-Star, which managed to whisk away many former centre-left voters thanks to its focus on helping the poor and the unemployed.

But many ordinary PD voters have taken to social media to mobilise against such an alliance, using the hashtag #withoutme.

Industry Minister Carlo Calenda, who announced on Tuesday that he would join the PD, also came out against any pact with the 5-Star, which has accused the centre-left of being corrupt and incompetent.

In the event of such an alliance “my membership of the party will be the shortest in the history of party politics,” he wrote on Twitter.

Full results of the election have still not been released because of legal disputes in the Lazio region centred on Rome.

But projections by YouTrend pollsters say the centre-right will take 267 seats in the lower house, 49 short of a majority, while 5-Star will have some 228.

Splashing cash not enough for PSG to deliver