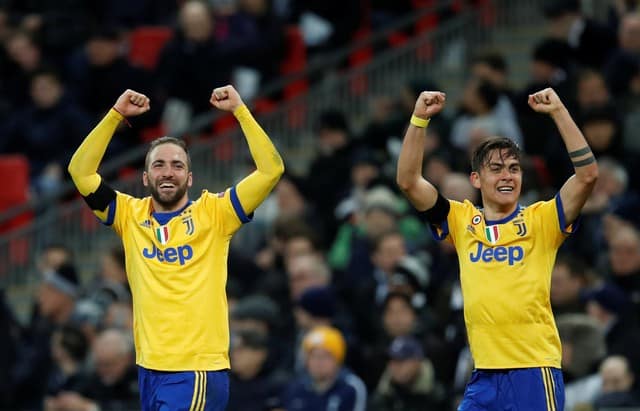 LONDON, March 7 (Reuters) – Juventus produced a Champions League smash-and-grab raid as Paulo Dybala’s goal earned them a 2-1 victory over Tottenham Hotspur at Wembley to send the Italians through to the quarter-finals 4-3 on aggregate on Wednesday.

Son Heung-min’s first-half effort had put Tottenham in control after they had drawn 2-2 in Turin last month and there was little sign of a Juve response until Gonzalo Higuain and Dybala struck in three second-half minutes.

Higuain poked in from close range to equalise in the 64th minute before fellow Argentine Dybala, who missed the first leg with an injury, curled past Hugo Lloris after bursting clear.

It was tough on Tottenham, who will rue several missed chances in the opening period and hit the post with a Harry Kane header in the 90th minute, but proof that Massimiliano Allegri’s experienced Juventus, runners-up in two of the last three seasons, remain one of Europe’s toughest nuts to crack.

Son was given the nod ahead of Erik Lamela on the left side of Tottenham’s attack and fully justified manager Mauricio Pochettino’s faith as he ran Juve’s experienced but creaking defence ragged before halftime.

His stinging shot tested Juve keeper Gianluigi Buffon in the third minute and another lightning burst into the box ended with Giorgio Chiellini making a crucial block.

Tottenham hounded Juventus as they did in the opening leg and Kane should have scored in the 14th minute when Dele Alli played him in but, after skipping around Buffon, the England striker fired his shot into the side-netting.

It was not one-way traffic though and the hosts had an enormous let-off shortly after Kane’s miss when Douglas Costa drove into the area and was tripped by an out-paced Jan Vertonghen and sent sprawling to the turf.

Vertonghen looked a picture of innocence as Juve’s furious players surrounded Polish referee Szymon Marciniak who opted against pointing to the spot despite replays confirming the Tottenham defender had taken Costa’s legs and not the ball.

Grizzled Juve defender Andrea Barzagli was lucky to escape a booking when he stood on Son’s leg after a challenge.

Son then drove a left-foot shot wide when he should have scored but his persistence finally saw him break the deadlock in the 39th minute courtesy of a slice of fortune.

Kieran Trippier picked out Son with a low cross and despite completely missing the ball with his right foot it cannoned off his standing left leg and dinked over the confused Buffon.

Not a classic, but neither Son, nor the Spurs fans cared.

It was only the third goal Juve had conceded in 12 games — all against a vibrant Tottenham side — and left them needing to score twice to stay in the competition.

Dybala missed the first leg with injury and was largely anonymous at Wembley — his first sight of goal not arriving until just past the hour when he drove wildly over.

A minute later, however, his fellow Argentine Higuain sparked the tie back into life when he stuck out a leg to touch home Sami Khedira’s knockdown.

Two minutes later Tottenham’s defence was caught square and Dybala was played through on goal and calmly advanced before curling past Lloris to send the 4,000 travelling fans wild.

A stunned Tottenham responded with Kane, who hit the post with a header that bounced up off the turf, Christian Eriksen and Son all going close for the hosts but Juve’s vast European experience saw them home.

City ease through despite rare home loss to Basel