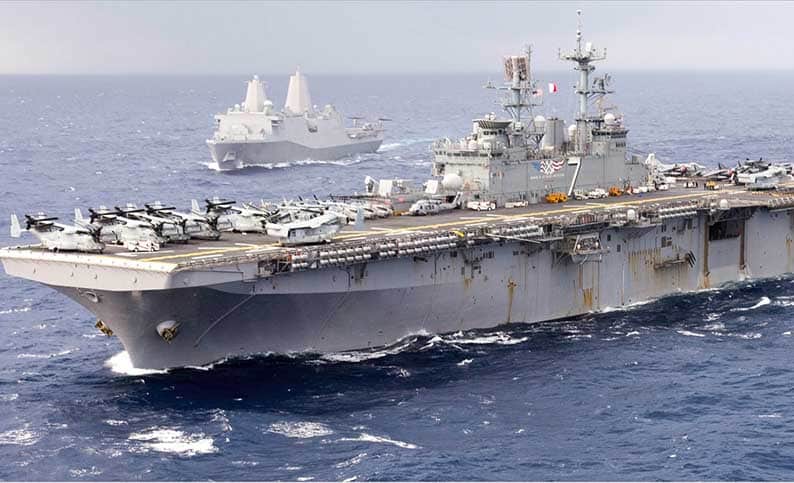 One of the US warships currently in the East Med (Photo: US navy website)

Foreign Minister Nicos Christodoulides on Wednesday urged caution when it came to reports linking the expected arrival of ExxonMobil vessels in Cyprus’ exclusive economic zone (EEZ) with the presence of a US navy fleet in the Eastern Mediterranean.

Following speculation in Russian and Turkish media, which was picked up by the Greek Cypriot press, that the US fleet was ostensibly in the region to protect ExxonMobil, Christodoulides told journalists on Wednesday: “With all due respect to the work you have to do, I will ask all of you publicly, and this is a request from the government, to be very careful about everything you see in the media that does not correspond to any real situation.”

The minister was speaking after a cabinet meeting in Nicosia.

“There is absolutely no need to create a backstory which, on the one hand, does not correspond to reality, and on the other, perhaps, attempts to create a new state of affairs or serve some other agenda,” he added.

Earlier he told Cybc’s morning show that the world was watching Cyprus and “listening to us”, which called for the utmost seriousness on the issue.

Christodoulides said there were ongoing diplomatic contacts over Turkey’s attitude at the level of the governments, and different scenarios on how to deal with Ankara, not least the European Council meeting on March 22 and 23 in Varna where Turkey’s behaviour would be on the agenda.

Asked to comment on reports that the ExxonMobil vessels were already in Cyprus’ EEZ, the minister said it would not be helpful to answer those kinds of questions.

“Did you know in previous drillings when they came to do either environmental or other research before the planned drilling? Was this a subject in public debate? When there is something that should be publicly announced, we will announce it and will not talk daily about whether they came or did not come.”

Earlier on Wednesday Ankara said it had information that an ExxonMobil ship was heading towards the east Mediterranean for oil and gas exploration.

“Turkey supported from the very beginning the idea that any hydrocarbon activities to be carried out in the area should be done jointly by the Turkish Republic of Northern Cyprus and south Cyprus,” said Kalin.

“The Greek Cypriot side is violating this principle,” he said.

Commenting on the reports that ships from the US 6th fleet had arrived in the area, Kalin said: “The US 6th fleet has still not arrived there. Our initiatives within this framework are still continuing. We shall continue to carry out our own exploration activities within our own territory. I would like to make a call. Let us turn the Eastern Mediterranean into a place that will benefit everyone…not a region of conflict or tension.”

Turkish Prime Minister Binali Yildirim said Wednesday neither Turkey nor the Turkish Cypriot breakaway state in the north would accept any unilateral initiatives regarding the natural resources around the island.

” … unilateral activities around the island are never welcomed by us. Nor does the Turkish republic of northern Cyprus welcome this,” Yildirim said after a meeting with Turkish Cypriot ‘prime minister’ Tufan Erhurman. “We consider any work which both parties do not agree to a threat as well as an attempt to breach the sovereign rights of northern Cyprus.”

Erhurman stressed the importance of the Greek Cypriot side accepting the political equality of Turkish Cypriots, also in connection with the natural wealth of the island.

The procedure for a lasting and viable peace situation must be built on political equality, he said.

Anastasiades’ statements on this issue, he said, show that he does not have a clear view yet as to the status of Turkish Cypriots. Erhurman said that his community not only wants to have a share in the island’s natural wealth but also wishes to have a say on this issue.

On Tuesday reports suggested that US Secretary of State Rex Tillerson, who previously served as ExxonMobil’s CEO, had criticised the recent Turkish naval blockade against Italian energy giant ENI in block 3, as “gunboat diplomacy” during a meeting with Turkish foreign minister Mevlut Cavusoglu.

Reports of the ExxonMobil arrival coincide with those saying the US was bolstering its presence in the region and media in Cyprus, Turkey and Greece have been speculating as to the connection.

A columnist for Turkish daily Milliyet even posited that “unless the Cyprus problem is resolved by October, or unless Turkey’s position on Cyprus’ hydrocarbons is accepted, there is a possibility of Turkish warships going head-to-head with US warships.”

The two survey vessels contracted by ExxonMobil, according to Cybc on Wednesday were due to arrive in Cyprus’s EEZ within 24 hours.

The two vessels are the Med Surveyor and the Ocean Investigator.

As of Wednesday afternoon, however, the former was still located off the port of Haifa, Israel, while the latter was still moored at the port of Lavrio, Greece, according to marinetraffic.com.

The two ships are expected in Cyprus’ block 10. They will be deploying remotely-operated underwater vehicles which will take further readings of the seabed at three selected locations in the block.

Their purpose is to gather more data to narrow down the most likely targets for gas drilling, which ExxonMobil is planning during the second half of the year. ExxonMobil will reportedly be drilling two back-to-back exploratory wells in late summer or early autumn.

As for the US fleet, according to the US Department of Defence, the USS Iwo Jima – the flagship of the expeditionary force which has since joined the US 6th Fleet in the Mediterranean – departed its homeport in Florida on February 7 for a scheduled six-month deployment.

The fleet arrived in Israel late Tuesday to participate in the Juniper Cobra 2018 (JC18) exercise.

According to an announcement by the Amphibious Preparedness Team (ARG), posted on the US-Navy website, while JC18 allows the US and Israel to increase interoperability between its various military forces.

The Juniper Cobra series has been regularly conducted since 2001 with the last iteration, JC16, being held in 2016.