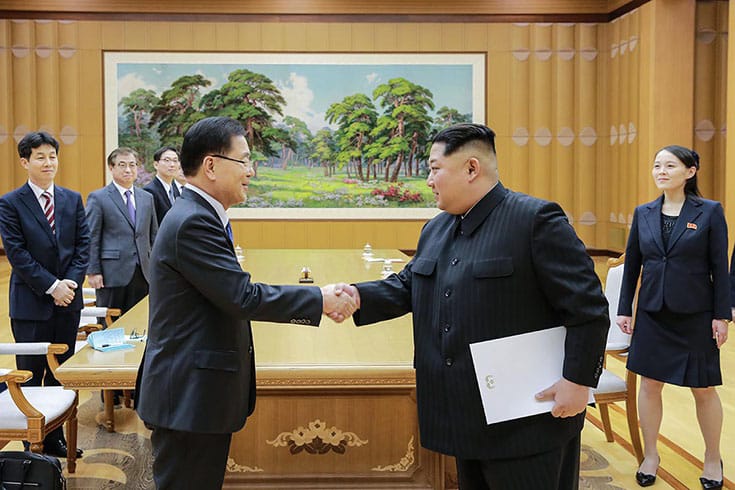 With the spectre of two past summits that failed to blunt North Korea‘s nuclear ambitions, South Korean officials planning talks next month now face the thorny task of overcoming familiar sticking points with the threat of war looming over any failure.

A South Korean delegation returned home on Tuesday from a first-ever meeting with NorthKorean leader Kim Jong Un, to announce the agreement on a North-South summit next month, the first since 2007.

Seoul officials see the talks as the starting point of President Moon Jae-in’s initiative to denuclearise and build lasting peace on the peninsula, beginning with a freeze in the North’s nuclear programme and ending in its complete abolishment.

“While pursuing a fundamental resolution of the standoff, we need to take some initial denuclearisation steps, putting a halt to further testing and returning to dialogue,” a senior SouthKorean government official said on condition of anonymity.

“One could argue we would be deceived by the North as we have been for the last 20 years, but that’s the past – we have different people and different programmes now,” the official said.

Moon said on Wednesday he had suggested to the North a rough roadmap progressing from a nuclear freeze to denuclearisation, an opposition party chair told reporters after meeting with him.

But Moon said there won’t be “many agreements” to come out of the summit, according to a ruling party lawmaker who took part in the meeting.

Moon also called a 2005 deal of six-nation nuclear talks, under which Pyogyang agreed to give up its nuclear programme in return for economic and energy aid and an end to its diplomatic isolation, a “failed model”, the first politician said.

Former officials in Washington and Tokyo reacted with scepticism to the North’s offer of talks on denuclearisation, seeing a familiar pattern of threats followed by talks that fail to win significant concessions.

Chief among the disagreements that have scuttled past efforts to defuse the standoff is NorthKorea‘s requests for security guarantees in return for abandoning its nuclear weapons.

During talks with Moon’s envoys this week, the North expressed its willingness to denuclearise if military threats against it are eliminated, and the security of its regime is guaranteed, without presenting precise conditions.

“(North Korea) has never said what they mean by the guarantee of regime security,” one former senior South Korean official told Reuters.

“That means it’s up to them to decide whether the security is guaranteed or not, and that means they have full control.”

Pyongyang has protested South Korea-US joint military drills as a rehearsal of war.

It has also called the roughly 28,000 American troops stationed in South Korea a potential invasion force that can only be countered by a robust nuclear deterrent.

The North’s official KCNA news agency said on Wednesday the United States is “getting frantic” with the deployment of US troops on the Korean peninsula and their drills to get “familiar with its terrain and arms buildup there”.

Moon’s special adviser Moon Chung-in has raised the possibility for a possible pullout of US forces, saying the president has the right to “let them out”.

Moon declined to comment on the summit, saying: “We will see.”

Any discussion of a US troop withdrawal will be fraught, however, as both Seoul and Washington see them as a bulwark against North Korean provocations.

“For the North, a peace treaty and denuclearisation means the removal of U.S. forces from not only the peninsula but also Japan and other bases in the Pacific theatre,” said Kim Young-mok, a former South Korean diplomat who was involved in the making of a 1994 freeze-for-aid framework deal between Pyongyang and Washington.

“We responded by pledging non-aggression, but I guess it wasn’t enough.”

Another senior official acknowledged the difficulty in making progress in any peace talks without addressing the issue of eliminating the military threat to North Korea and guaranteeing the security of its regime.

“The North bring up disarmament talks and the withdrawal of US forces”, the official said.

“If they do, things could get ugly quickly despite the summit, and the South Korea-US alliance would face serious problems. But if the North were to move things forward, they would hopefully present something more realistic.”

Wi Sung-lac, a former South Korean nuclear negotiator, said there needs to be clearer mutual understanding of the definition of denuclearisation to facilitate future talks.

“It’s unlikely to see any tangible outcome on the nuclear issue before the summit,” he said.

“The United States and North Korea could sit together at the negotiating table in the meantime, which would provide better optics for the summit but probably not in terms of substance.”