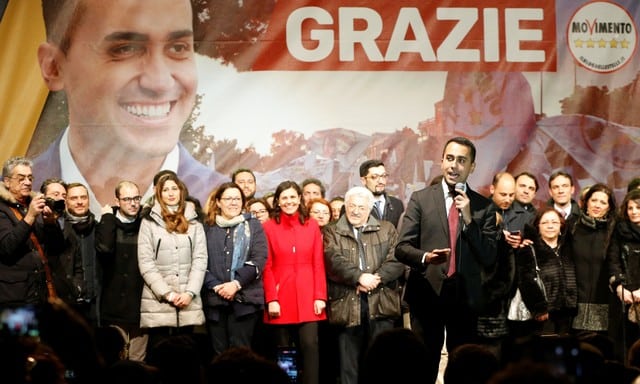 The leader of Italy‘s anti-establishment 5-Star Movement said on Friday his party was preparing economic policy proposals for other parties as a way of finding common ground to form a government after Sunday’s inconclusive election.

5-Star emerged as by far the leading party at the election but does not have enough seats to govern on its own.

Its leader Luigi Di Maio says the president should give 5-Star the right to try to form a government, but the centre-right coalition parties that got most seats combined say the job should fall to them.

In an interview in daily Corriere della Sera, Di Maio said his party would soon present proposals to be incorporated in the outgoing government’s multi-year economic plan, which must be presented by April 10.

“We want to move quickly … if the other parties want to propose other measures that will help people then we are ready to discuss them,” Di Maio said.

The prospects for coalition building have dominated the Italian political debate since the election, with most commentators focusing on the possibility of a tie-up between 5-Star and the centre-left Democratic Party (PD).

“That is what the newspapers write, but I have always said I will discuss with all the parties, with no exception,” said Di Maio, 31, who was elected as 5-Star’s leader in September.

For years after its foundation in 2009, 5-Star said it would not form coalitions with mainstream parties.

But as the prospects of a hung parliament increased ahead of the election Di Maio nuanced that stance, saying he would be willing to discuss a common policy platform with the other parties but not negotiate over government posts.

All the main parties campaigned on pledges to cut taxes, hike spending and raise the budget deficit from levels agreed with the EU, while simultaneously promising to cut debt.

The centre-right is hoping to get the backing of the defeated PD in its own bid to form a government, one of its senior parliamentarians said in another interview in Corriere della Sera on Friday.

“We are trying to understand if the PD will be willing to give us some sort of support,” said Renato Brunetta, lower house leader of Silvio Berlusconi’s Forza Italia (Go Italy!) party.

Brunetta reiterated that the prime minister should come from the centre-right, as the largest coalition, but said it may not necessarily be Matteo Salvini, the head of the far-right League which was the leading party in the bloc at the election.

“The candidate (now) is Salvini, but it could also be someone else that he puts forward, if that is what we agree together,” he said.

Salvini has so far given no indication he may be willing to stand aside for another, more moderate centre-right figure.

President Sergio Mattarella will not begin formal consultations with parties over government formation until after March 23, when the new parliament convenes to elect the speakers of the two houses.

On Thursday the often inscrutable Mattarella called for the parties to show “a sense of responsibility” and put the interests of the country before party-political considerations.

Mattarella hopes to broker a deal which will avoid the need for a fresh election that would risk being no more conclusive than the last one, sources close to the president have said.

Di Maio told Corriere the other parties would “pay a high price for their irresponsibility” if they refused to negotiate with 5-Star, making new elections necessary. 5-Star won 32 per cent of the vote on Sunday, almost twice as much as the second largest party.

“We would have nothing to lose” from a return to the polls, he said.