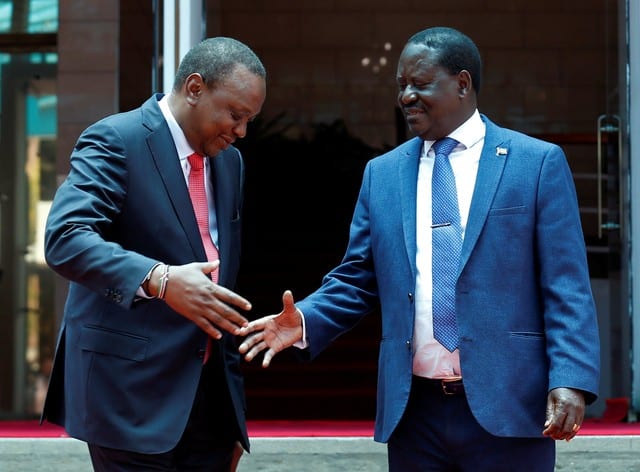 Kenya‘s President Uhuru Kenyatta and opposition leader Raila Odinga promised on Friday to unite the country after elections last year in which around 100 people were killed mainly in clashes between opposition supporters and security forces.

The surprise announcement could lower political tension in a country that is East Africa’s richest economy and a key regional hub for security, diplomacy and trade.

But some Kenyans said the meeting was merely a veneer of unity ahead of a visit to Nairobi on Friday by US Secretary of State Rex Tillerson and it would do little to address underlying divisions that fuelled last year’s violence.

In a live television address with Kenyatta on the steps of the president’s office, Odinga said the time had come to resolve their differences.

It was the first joint public appearance of its kind by the two politicians since 2013.

Kenyatta said: “We have a responsibility as leaders to find solutions. Elections come and go butKenya remains.”

They said in a statement they have agreed to establish a new office staffed by advisers to tackle the divisions ranging from opposition complaints over the election to tensions between ethnic groups and corruption.

Kenyatta was sworn in last November for a second term after winning a repeat presidential election last Oct 26 that Odinga boycotted. The Supreme Court earlier nullified an August presidential poll and order the October re-run.

Murithi Mutiga, a senior analyst with the International Crisis Group, said the meeting between the two “titans” of Kenyan politics was key because they have been feuding for so long.

“The symbolism is very important but it is vital that they also invest heavily in ensuring that a more lasting settlement emerges from their talks,” he said, citing the need to stamp out violence every time elections are called.

“PEOPLE AT THE TOP”

The election season blunted growth in Kenya, East Africa’s richest economy and a Western ally in a volatile region.

In January, Odinga took a symbolic presidential oath in a Nairobi park in a direct challenge toKenyatta.

Before the Friday meeting, the two men had defied calls from Kenyan civil society, religious leaders and Western diplomats to hold talks to overcome deep divisions opened up by the disputed elections.

Political analyst and writer Patrick Gathara said such a dialogue is still needed despite Friday’s meeting. “We need to get out of this cycle of just these two men, or a few people at the top, meeting,” he said.

Prominent anti-corruption campaigner John Githongo said it was difficult to understand why the meeting happened now and he cautioned that “the devil is in the details.”

Odinga said the opposition had decided to change tactics for the sake of the country’s unity. “We refuse to allow our diversity to kill our nation,” he said.

Allies in Odinga’s Nasa coalition, including his running mate in last year’s poll, Kalonzo Musyoka, said they were not aware of the meeting and promised to give a detailed statement later.

Tillerson arrives in the Kenyan capital on Friday afternoon, part of his seven-day visit to Africa. One analyst said his arrival could be linked to the rapprochement between Kenyatta and Odinga.

“The US should not be dismissed or discounted. They have successfully engineered this,” said Aly Khan Satchu, an independent analyst in Nairobi.

One lawmaker said Kenyatta, who is in his final term, and Odinga, who turned 73 in January, may be keen on securing their legacies with the new found unity of purpose.

Moses Kuria, a legislator for Kenyatta’s Jubilee party said the meeting could be the start of ending the cycle of disputed elections and their ruinous impact on economic growth.

“We are the only country that goes for elections and ends up with an economic slump… It is good for the country,” said.

Jesus playing with fear after returning from knee injury