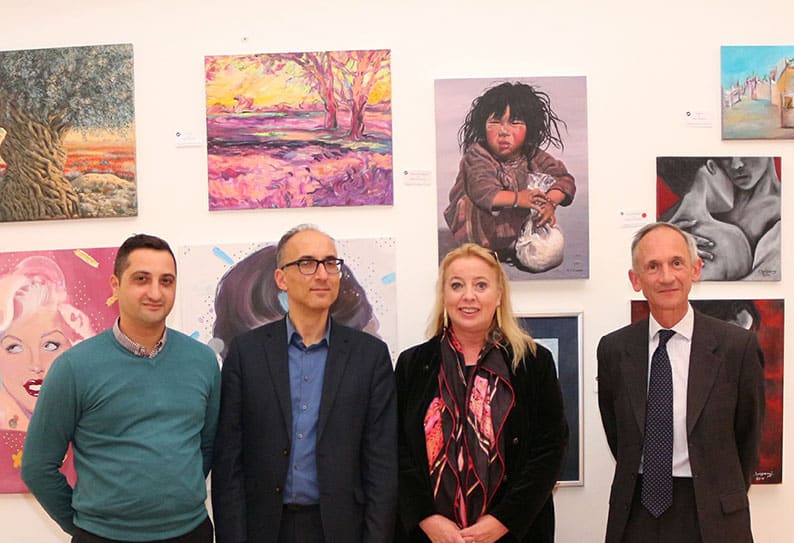 A group art exhibition ‘Life’ in aid of charity Pasykaf will open in its final destination, Nicosia on Saturday and members of the public will be able to purchase ‘bargain’ art as prices are being reduced by half in order to raise as much money as possible, said the organiser.

The month-long touring art show is the vision of Paphos resident Sarah Coyne, and features more than one hundred pieces of art by leading Cypriot and European artists. Thirty pieces have already been sold but will continue to be part of the exhibition which will be in Nicosia at the 10,10,4 gallery for the next ten days, said Coyne.

The artworks have been donated for sale and all of all funds raised will be given to Pasykaf – The Cyprus Association of Cancer Patients and Friends, to be used for their ‘direct support services’. This includes the home-care nurses, similar to Macmillan nurses in the UK, a bus service to take patients to the Oncology Centre in Nicosia, social and psychological support, a day centre for physiotherapy and ongoing support for cancer patients and their families.

“We need to sell all of the art by the end of the exhibition to make as much money as possible for Pasykaf, we have a responsibility to sell it and support the wonderful work of this charity,” she told the Cyprus Mail.

Coyne said that along with reducing the price on the final evening of the exhibition, March 17, an auction will be held to sell anything that is left. There will be reserve prices set on the pieces though, in order to be ‘fair’ to the donating artists, she said.

The Space Art for Charity is a non-profit initiative which got underway in 2015 and all those involved in the organisation and promotion of the event are volunteers. So far, it has raised more than €10,000 for local charities.

The exhibition is proving a success so far, with both Paphos and Limassol events being well attended. Mayor of Paphos Phedonas Phedonos inaugurated the exhibition at the Almyra Hotel last month, which was also attended by the British High Commissioner to Cyprus, Matthew Kidd.

Coyne, who is passionate about art and culture, noted that whilst in the capital, the exhibition is being held under the auspices of the ministry of education and culture.

“It has been a challenging but worthwhile experience and there has been great support from all of the participating artists and businesses involved who have all given their services for free,” she said.

Dead Rottweiler found near Anarita, tests to establish any connection with woman’s death