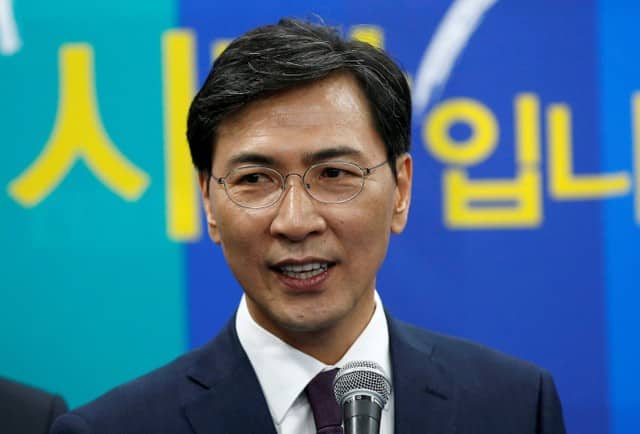 An Hee-jung makes a speech at an event

A one-time rising star in South Korea‘s ruling party, who quit his political post this week hours after an aide accused him of sexual assault, apologised on Friday in his first public appearance since the accusations emerged.

The downfall of An Hee-jung, who was governor of South Chungcheong province and a hopeful in last year’s presidential election, comes as the #MeToo movement against sexual assault and harassment has taken off in the male-dominated society.

“I’m sorry. I was wrong. I apologise to many people hurt by me. I’m really sorry to my wife and children,” An told reporters at a prosecutors’ office.

An’s aide, who accused him of sexual misconduct in a television interview, filed a complaint with prosecutors this week, her lawyer’s office said earlier.

An said he would fully cooperate with the prosecutors’ investigation.

An, who had been seen as a future candidate for the presidency, has announced his retirement from politics having taken responsibility, in a Facebook post, for his actions.

Discussion of sexual misconduct has long been taboo in South Korea but in recent months the #MeToo movement has snowballed, ensnaring a number of high-profile figures across various fields, from the entertainment industry to the religious community and literary world.

On Friday, an actor and university professor, Cho Min-ki, who was also facing harassment allegations, was found dead, according to a hospital official.

The Yonhap News Agency reported that Cho was suspected to have committed suicide. Police said they were investigating.

Cho stepped down from his teaching position and left a role in a new television series after facing harassment allegations, according to an official at the actor’s former talent agency.

President Moon Jae-in has thrown his support behind the campaign against sexual assault and harassment and urged tough action against wrongdoing.

The government has vowed to strengthen laws against harassment.

‘Water as far as eye can see’ as floods hit Australia