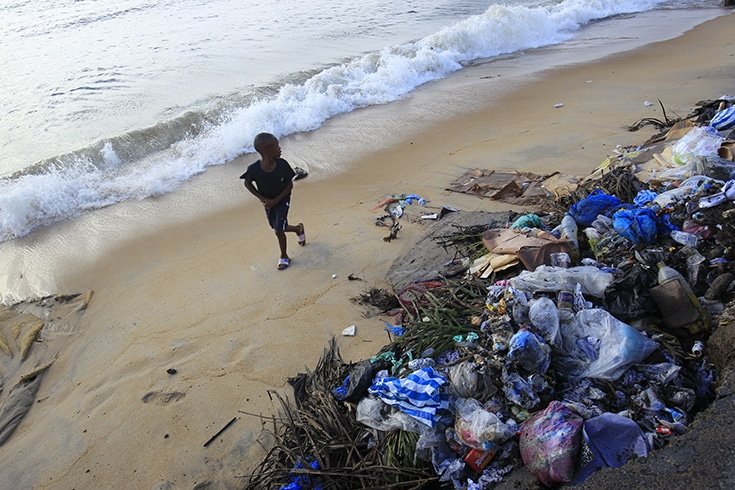 Billions of people depend on oceans for their food and livelihoods

To save the world’s oceans from rampant over-fishing, pollution and degradation, countries should hammer out a deal like the Paris Agreement on climate change that sets stringent targets for protection, said the head of global conservation group WWF.

Such an accord would help the world’s poorest who depend on the seas for jobs and food, said WWF International President Pavan Sukhdev.

People should pay attention to the origins of their seafood and push companies to play their part in ocean conservation, said Sukhdev, who warned that the amount of plastic consumed by fish could spark a health crisis.

“There hasn’t been a Paris of the oceans yet – we need that with extreme urgency,” Sukhdev told the Thomson Reuters Foundation in an interview.

Nearly 200 nations signed up to the 2015 Paris Agreement which aims to keep the rise in average global temperatures to “well below” 2 degrees Celsius above pre-industrial times, and ideally to 1.5 degrees.

Sukhdev was speaking on the sidelines of the World Ocean Summit at the Mexican resort of Playa del Carmen on Friday, where environmentalists, politicians and business leaders met to discuss how to improve the state of the world’s oceans.

Alongside dwindling fish numbers, oceans are also beset by rising temperatures, acidification and pollution, particularly from the trillions of pieces of plastic in the sea, which are starting to make their way into the food chain.

Some of the world’s poorest people who rely on the oceans for their livelihood are suffering worst from the over-fishing and contamination that is slashing the amount of fish available for them to catch, said Sukhdev.

“It’s not just an environmental problem – it’s actually a social problem of enormous dimensions,” he said.

Billions of people depend on oceans for their food and livelihoods, but the United Nations Food and Agriculture Organisation (FAO) says nearly 90 per cent of fish stocks are over-fished or fully exploited as global demand rises.

“Ocean change, like climate change, is underway… The good news is we’re now taking action,” said U.N. Special Envoy for the Ocean Peter Thomson. “At the moment, we’re not winning, but the battle’s on,” he told the Thomson Reuters Foundation at the conference.

Developing the so-called “blue economy” could lure capital into bonds and other financial instruments designed to help protect the oceans, but people could make a difference simply by cutting their use of plastic which is contributing to contamination, said Thomson.

Blockchain technology could help some consumers scan the fish they buy, like tuna, to see where it comes from, while greater use of satellite technology could boost monitoring and crack down on illegal fishing in protected areas, said Sukhdev.

Uncontrolled plastic pollution now risks developing into a “very severe” health issue with tiny particles turning up in the fish that ends up on people’s plates, he warned.

While close to 200 countries signed up to a UN proposal in December to stop plastic pollution, an estimated 8 billion tonnes of plastic washes into the ocean each year to join the 5 trillion pieces of plastic thought to be already floating around the world.

“No amount of effort spent in getting these messages created, packaged and presented to people so they can themselves push for the right answer… is a bad idea,” he added.