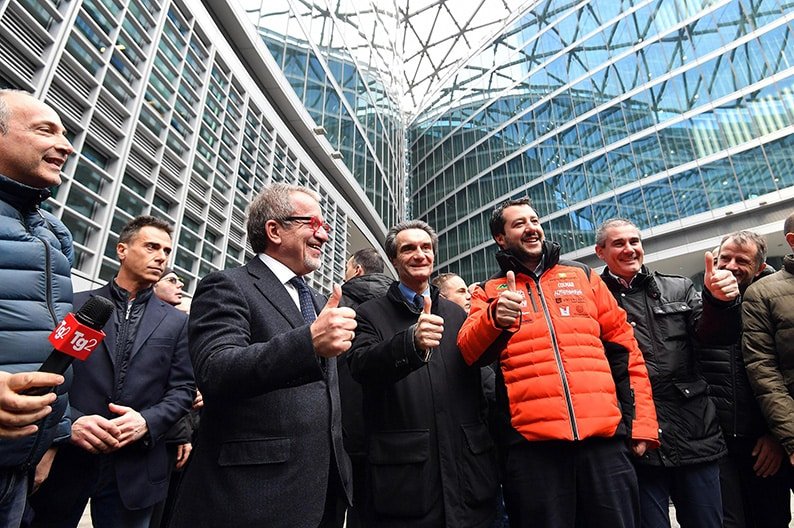 Lucky old Italy just got two Donald Trumps for the price of one. One of the big winners in last Sunday’s Italian election was the Five-Star Movement, whose 31-year-old leader Luigi di Maio has promised to stop sending out rescue boats to save migrants from drowning when their flimsy craft sink halfway across the Mediterranean. A “sea taxi service”, he calls it and promises to send all the surviving illegal immigrants home.

So does Matteo Salvini, the leader of the League (formerly the Northern League), the other big winner in the election. “I’m sick of seeing immigrants in hotels and Italians who sleep in cars,” Salvini told supporters at a recent rally in Milan. He pledges to send 150,000 illegal migrants home in his first year in government.

It is not yet clear whether Salvini and/or di Maio will actually be in government. A coalition between the Five-Star Movement and the League would command a majority in parliament and is one possibility, but other combinations are also possible. However, it’s already clear that these two populists won more than half the votes on openly racist platforms.

‘Openly racist’? Di Maio and Salvini generally stop just a millimetre short of that, but Attilio Fontana, the senior League member who has just won the governorship of Lombardy, Italy’s richest region, has no such qualms. “We have to decide if our ethnicity, if our white race, if our society continues to exist or if it will be cancelled out,” he said recently.

Now it’s true that 600,000 illegal migrants, mostly from Africa and the Middle East, mostly Muslim, and mostly young men, have arrived on Italy’s shores in the past four years, which was bound to startle the older residents. On the other hand, there are 60 million people in Italy, so that’s just one per cent of the population. Why is that such a big deal?

You might as well ask why it’s such a big deal that an estimated half-million illegal migrants enter the United States each year. That is only one illegal immigrant per year for every 600 people who are already in the country. Half of those illegals aren’t even Mexicans, and yet Donald Trump won a lot of votes by promising to build a Wall on the Mexican border to stop them.

Both in the United States and in Italy, the real fuel behind the populist surge is high unemployment (the official US figure is a fantasy) and long-term stagnation in the incomes of the lower-paid half of the population. The immigration issue just serves as a visible symbol of the displacement so many feel as the economy pushes them to the margins.

The popular discontent and the political malaise cannot be cured by sending a few hundred thousand migrants home, even if that were easily done. In many cases, it is practically impossible.

The Mexican government currently cooperates with the US, so at the moment it is relatively easy to send illegal immigrants back across that border. The illegal migrants in Italy and other European Union countries are a quite different story, because their countries of origin will generally not want them back, and EU human rights laws make it hard to just give them parachutes and push them out of planes.

What we are seeing now, however, is a foretaste of the time when the migrant flows grow very large and the politics get really brutal. In the not too distant future, the Mediterranean Sea and the Mexican border will separate the temperate world, where the climate is still tolerable and there is still enough food, from the sub-tropical and tropical worlds of killer heat and dwindling food.

This is a regular subject of confidential discussions in various strategic planning cells in European governments, and also in the grown-up parts of the US government. Ten years ago a senior officer in the intelligence section of the US Joint Chiefs of Staff told me that the US army expected to be ordered by Congress to close the Mexican border down completely within the next twenty years. And he was quite explicit: that meant shooting to kill.

This was many years before Donald Trump came up with the Wall, and even today it’s still not needed. But one day it will be, because global warming will hit the countries closer to the equator far harder than the fortunate countries of the temperate zone, and the main casualty will be food production in the tropics and the sub-tropics.

So the hungry millions will start to move, and the borders of the richer countries in the temperate parts of the world will slam shut to keep them out: the United States, the European Union, Russia, South Africa, Australia. If you think the politics is ugly now, just wait

Of course, a miracle could happen. There could be early and very deep cuts in greenhouse gas emissions worldwide so that most of the catastrophe never arrives. But I’m having trouble even believing in the Easter Bunny any more. This is harder.