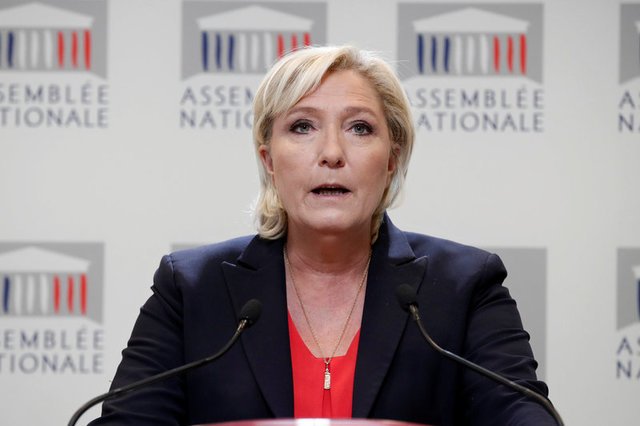 French far-right leader Marine Le Pen proposed her National Front party be renamed the “National Rally” on Sunday, in a bid to shed a brand associated by many voters with racism and anti-Semitism and facilitate alliances with other parties.

Speaking at a party congress meant to help her reassert her authority following her defeat to President Emmanuel Macron last May, Le Pen said the party’s priority should be to gain power, which could only be achieved through a coalition with allies.

“Our goal is clear: power,” Le Pen told party cardholders gathered in the northern city of Lille, who cheered her speech denouncing immigration, globalisation and a federal Europe.

“We were originally a protest party,” she said. “There should be no doubt now that we can be a ruling party.”

The idea of changing the party’s name was only approved by a narrow majority of National Front members, with 52 percent backing it on Saturday, according to figures provided by the party. They will get to vote again on the new name by post.

Jean-Marie Le Pen, the 89-year old far-right veteran who founded the party in 1972, called the name change political “suicide” in an interview with Reuters last month.

“The National Front name carries an epic and glorious history, which no-one should deny,” Marine Le Pen said. “But you know it is for many French people a psychological obstacle.”

In her speech, she slammed Macron’s On The Move party as the embodiment of globalists cut off from France’s roots. “In Macron’s France, to be on the move is to be a nomad. Just like migrants and tax evaders,” she said.

Although she lost last year’s election, Marine Le Pen’s efforts to clean up the party’s image have paid off to some extent. She won a third of the vote in the run-off, almost double her father’s best showing in his 40 years at the party’s helm.

She watered down her anti-euro stance, which has proved unpopular beyond the party’s core fans, after the election, refocusing the party on migration and security as other far-right parties in Europe have done.

“Legal and illegal immigration are no longer bearable,” she said to rousing applause.

Standing unopposed at this weekend’s congress, she was reelected with 100 percent of the votes.

Her strategy is also showing signs of tempting some in the conservative Republicans party to forge an alliance.

“The National Front has evolved, let’s look at whether a deal is possible,” Thierry Mariani, a former minister in Nicolas Sarkozy’s government, told the Journal du Dimanche. That was quickly slapped down by the Republicans’ spokeswoman.

However, it remains unclear whether rebranding the party will be enough to change its extremist image among the wider public.

In an Ifop poll published on Sunday, 63 percent of the French said the National Front would present a threat for democracy if it gained power.