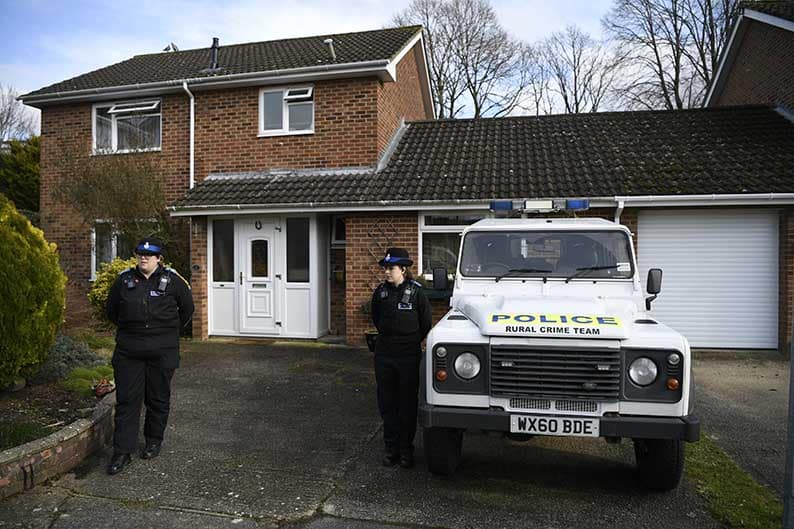 epa06584862 Police stand outside of an address believed to be the home of former Russian spy Sergei Skripal in Salisbury, Britain 06 March 2018. Media reports state that former Russian spy Sergei Skripal and daughter Yulia Skripal is in intensive care after allegedly being exposure to an unknown substance as they sat on a bench in the centre of Salisbury, southern England. Skripal, a former Russian intelligence officer, who had been sentenced to 13 years in prison on charges of spying for the the Britain and later in 2010 was exchanged in a spy swap. Sergei Skripal and his daughter Yulia Skripal were found unconscious on a bench in The Maltings shopping centre Salisbury. Police sealed the bench and closed a restaurant, in which he was seen eating. Both remain in a critical condition in intensive care. EPA/NEIL HALL

Among those who knew Sergei Skripal in the quiet English city of Salisbury, few seem to have been aware of his background as a spy and British-Russian double agent. He frequented local pubs, bought lottery scratch cards in corner shops and joined a social club alongside local men in their 60s.

Last Sunday, that past seems to have caught up with him. Skripal and daughter Yulia were poisoned by what British authorities say was a sophisticated nerve agent; they are now hospitalised in critical condition. A policeman who responded to their collapse on a bench outside a shopping centre was also exposed and his condition is classed as “serious”.

However, the difficulty of manufacturing the chemicals makes them practically the calling card of a government-sponsored assassin. And that may be part of the point – to remind foes no one is safe no matter how far or long they run. That opinion is increasingly shared by experts on Russia, who see the poisoning as a sign of just how committed Vladimir Putin’s Kremlin has become to eradicating its enemies – and reminding others it can do so.

If Moscow was behind the attack, its timing ahead of Russia’s presidential election is significant. Putin is almost certain to win the March 18 vote, but he is sending a message with his increasingly bellicose rhetoric aimed at the West as well as domestic protesters.

Earlier this month, he announced Russia had developed an array of sophisticated new nuclear weapons. That speech, along with signs pointing to Russian involvement in the Skripal attack, offers another stark reminder of just how antagonistic Russia is becoming to the West – and how willing it is to tear up the conventional and military rulebook.

Like Russia’s recent nuclear posturing, threats to nearby states and wider political interference, the intention seems to be to make it difficult for Western countries to respond. The most likely path will be further economic sanctions, but while that will inflict some economic hardship on those at the top, it simply serves to deepen the very divisions between Moscow and the West that Putin uses as domestic political currency.

Such action now seems part of both Putin’s personal brand and the anti-Western national identity he fosters. According to a recent survey, half of Russian school-age boys said they dreamed of working for the security services. Those who want more democratic change, meanwhile, are increasingly aware they must watch their step and avoid becoming too great a threat.

Any state body using a nerve agent so blatantly is clearly disregarding the traditional rules of international order, as well as the welfare of others in the vicinity. North Korea drew international outrage when it was accused of using a similar technique to kill the half-brother of leader Kim Jong Un at a Malaysian airport last year. The repercussions from that death continue: on Tuesday the United States imposed additional sanctions on North Korea after determining that Pyongyang used the chemical warfare agent VX in the murder – although that hasn’t stopped South Korea from pushing ahead with cross-border negotiations.

Despite Russia’s denials, it is unquestionably true that Kremlin enemies often end up dead. Other high-profile killings include opposition politician Boris Nemstov, gunned down on a Moscow bridge in February 2015.

The Kremlin has long reserved particular fury for former spies who switched loyalty. In 2010, after the arrest and extradition of 10 suspected Russian agents from America, an unnamed Russian official told a respected Moscow newspaper a contract killer had been sent to assassinate the defector who betrayed them. (This could not have been Skripal, who was already in prison in Russia for spying for British intelligence.)

“A Mercader has been sent after him,” the official was quoted as saying about the unnamed defector, an apparent reference to Spanish communist Ramon Mercader, sent by Stalin to kill his former political ally Leon Trotsky in Mexico with an ice pick in 1940.

Inevitably, the Salisbury incident has also drawn comparisons to the 2006 London death of Alexander Litvinenko, the former spy who accused Putin of running a gangster state.

A British inquiry into that case concluded Litvinenko was murdered with the radioactive substance Polonium 210 by Russian assassins “probably approved” by Putin. It prompted a schism in Anglo-Russian relations, but more recently there have been worrying signs authorities in countries like Britain and the United States have sometimes turned a blind eye to suspected killings linked to Moscow.

Last year, investigative reporters from BuzzFeed News identified 14 deaths of Russians or Russian-linked individuals in Britain and quoted US intelligence officials as saying they appeared to be assassinations.

They also pointed to several unsolved deaths in the United States, including of Kremlin critic Mikhail Lesin in a Washington hotel room in 2015.

Ukraine has seen multiple assassinations and attempted killings in the last two years, often of figures involved in its war with Russia or outspoken against Moscow’s influence. Two prominent European investigative journalists who probed Russian money-laundering were also slain in Malta and Slovakia.

Getting to the bottom of what happened is difficult in the extreme – and it might be simplistic to suggest Putin ordered all of the killings.

Russia’s domestically-focused Federal Security Bureau, primary successor to the KGB, was increasingly active outside its borders, said Galeotti. Other agencies were also increasingly willing to take risks. “We have seen Chechens gunned down in Turkey and Austria,” he wrote. “We have seen an Estonian security officer kidnapped from his own country… We have seen hacks, smears, blackmail and gangsterism.”

By coincidence or not, this week marks the 65th anniversary of Josef Stalin’s death. Putin is hardly in the same league when it comes to brutality and oppression. But as Russia’s latest strongman enters his late 60s and Russia begins to ponder who might follow him, he seems equally desperate to be feared.

Unique pedal cars to go under the hammer