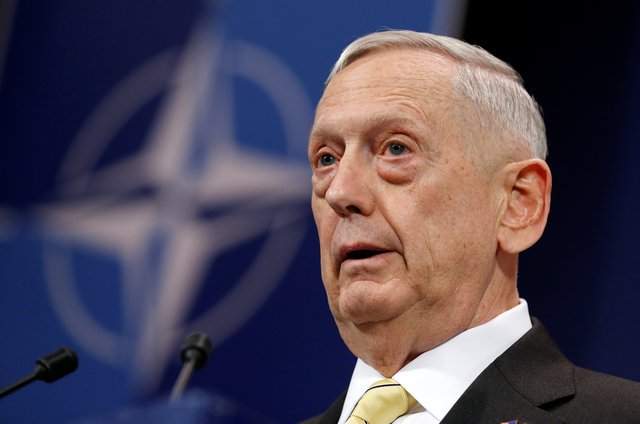 U.S. Defense Secretary Jim Mattis warned Syria on Sunday it would be “very unwise” for government forces to use weaponized gas, as he cited unconfirmed reports of chlorine attacks in eastern Ghouta and slammed Russian support for Damascus.

Mattis stopped short of threatening to retaliate against Syrian forces if a chlorine attack were confirmed.

But he noted America’s cruise missile strike on April 6, 2017, on a Syrian air base over a sarin gas attack and said President Donald Trump had “full political maneuver room” to take whatever decision he believed was appropriate.

“It would be very unwise for them to use weaponized gas. And I think President Trump made that very clear early in his administration,” Mattis said, speaking with a small group of reporters before landing in Oman.

Mattis said he did not currently have clear evidence of any recent chlorine gas attacks but noted numerous media reports about chlorine use.

Rescue workers and opposition activists in eastern Ghouta have accused the government of using chlorine gas during the campaign.

The government firmly denies this. Damascus and Moscow have accused rebels of planning to orchestrate poison gas attacks in order to draw blame onto the Syrian government.

Syrian President Bashar al-Assad has vowed to continue the offensive in eastern Ghouta, one of the deadliest in the war.

With the conflict entering its eighth year, capturing eastern Ghouta would be a major victory for Assad, who has steadily regained control of rebel areas with Russian and Iranian support.

Mattis chided Moscow for partnering with Assad, suggesting it might even be a partner in the Syrian government’s strikes on civilians.

“Either Russia is incompetent or in cahoots with Assad. There’s an awful lot of reports about chlorine gas use or about symptoms that could be resulting from chlorine gas,” Mattis said.

The White House said last week Russian military aircraft took off from Humaymim Airfield in Syria and carried out at least 20 daily bombing missions in Damascus and eastern Ghouta between Feb. 24 and Feb. 28.

It did not say whether the jets dropped ordnance, which could be harder to determine than tracking the flight paths of Russian aircraft on U.S. radar. But the United States directly accused Russia of killing civilians.

Mattis declined to elaborate on whether Russian jets directly carried out bombings, saying Moscow was involved either way.

“They are Assad’s partner and whether the airplane dropping the bomb is a Russian airplane or a Syrian airplane, I’d prefer not to say right now,” he said.

The multi-sided war has killed hundreds of thousands of people since 2011.

How infertility treatment has left sperm science behind

One of two ExxonMobil survey ships on its way to Limassol