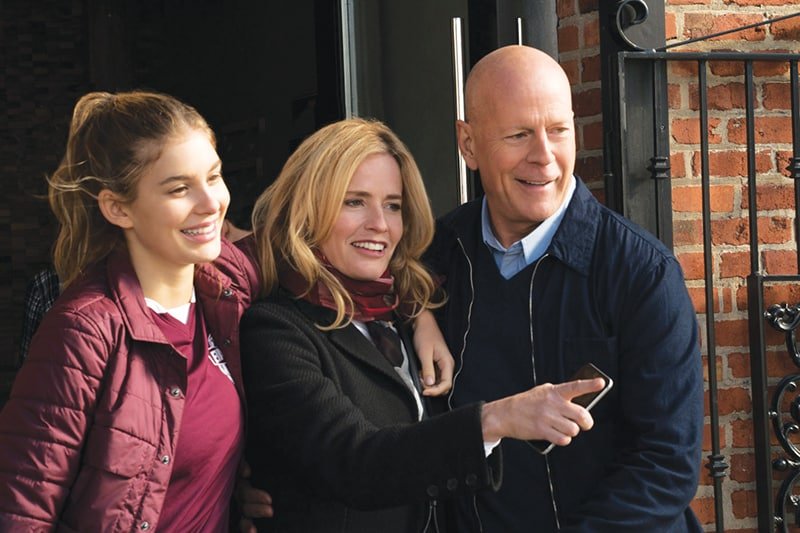 It’s nice (or not nice, according to taste) to have two disturbing, disreputable B-movies opening in the same week – but Mom and Dad is authentically unhinged and over-the-top whereas Death Wish, remaking the Charles Bronson cult classic from 1974, is just dull and distasteful. You have to go all-in if you’re making something controversial (the original was highly controversial in its day). Mixed messages and a blandly respectable surface only make you seem timid – much like Dr. Paul Kersey (Bruce Willis) at the beginning of this movie – and make the gory details seem more, not less, offensive.

Dr. Kersey’s journey from family man and excellent surgeon to a hooded vigilante known as the ‘Grim Reaper’ is the crux of the plot, with Chicago replacing no-longer-seedy New York and Willis even more inexpressive than Bronson (whose legendary poker face hadn’t quite descended in 1974). Kersey starts shooting bad guys at random after his wife is killed, and his daughter left in a coma, by burglars – though in fact the actual vigilante plot is both hedged by caveats (talk-shows debate whether applauding the Reaper counts as “normalising dangerous behaviour”) and quickly abandoned in the second half, the doc going after his wife’s killers without any larger agenda.

Director Eli Roth has one bright idea which is to make the violence gradually more graphic, starting discreetly off-camera and ending with heads being squished and brains spilling out. The point, presumably, is to get us sucked in – like Kersey – so we grow more desensitised, i.e. dangerous behaviour becomes normalised. But the film doesn’t suck you in. It lacks urgency. It lacks craziness. It lacks sleaze, which the first Death Wish had in spades. The home invasion (which is, after all, the inciting incident) is nuts in the original, directed by notorious sleaze-master Michael Winner. The hopped-up, murderous ‘freaks’ (including a young Jeff Goldblum) giggle maniacally, spray-paint swastikas, hurl invective at their middle-class victims, strip the daughter and “paint her ass” before raping her. Here, on the other hand, the intruders are businesslike, strictly after the valuables, the burglary getting very botched indeed before guns are resorted to. It’s all a bit blah.

Kersey’s revenge is equally blah, or perhaps Willis can no longer muster much energy. His first random kill should be cathartic, but in fact it has no buzz at all; he literally seems more excited when watching it later on YouTube than when actually doing it (the kill is, inevitably, filmed by a passer-by and uploaded on social media). Only when things get personal does the plot semi-work, in the simple way of any revenge drama, but this diminishes the power of Death Wish. Anyone might turn vigilante when faced with his wife’s actual killers; the juicy provocation comes in the personal becoming political.

The script nods in some interesting directions – e.g. the Reaper spawning copycat Reapers – as well as uninteresting ones like Kersey haunted by ‘daddy issues’. There’s a strand about masculinity, our hero feeling like he’s failed at “the most important things a man does” (i.e. protecting his family). There are hints of emasculated men in a namby-pamby world, thus for instance the gruff cop on the case (Dean Norris, effortlessly stealing the show) has reluctantly replaced doughnuts with organic gluten-free bars. All these hints and nods could’ve led to something – yet they’re all undeveloped. This new Death Wish has no reason to exist, except to leech off the old Death Wish.

It’s almost like the film is embarrassed by itself. Guns are a big motif, of course, indeed this is almost a cinematic version of Trump’s recent brainwave about arming teachers to prevent school shootings (arm the Dr. Kerseys of the world to prevent street crime) – yet the film, once again, pulls its punches. A visit to a gun shop is played for laughs (“First gun?” asks the perky blonde salesgirl), with a few digs at over-lax gun laws – which is fine and admirable, but not in a movie where your hero’s wasting bad guys and taking the law into his own hands. The attempts at balance only make the violence look cynical, hence more unpleasant. At least Winner and Co. seemed to believe in this dubious material.

“This is straight out of a comic-book,” says someone, watching the Reaper’s YouTube video, and so it is: Kick-Ass, to name one example, has done the masked-vigilante plot with a lot more zest than this tame retread. Giving Death Wish the benefit of the doubt (it’s written by Joe Carnahan, who made the excellent The Grey), it may be that someone looked at the 1974 movie and genuinely tried to update it – but if so, they forgot to keep what made it special, viz. the comic-book sensibility. This should’ve been either madly clever or completely ridiculous. As it is, it’s just dead.

Apollon replace Apoel at the top of the table