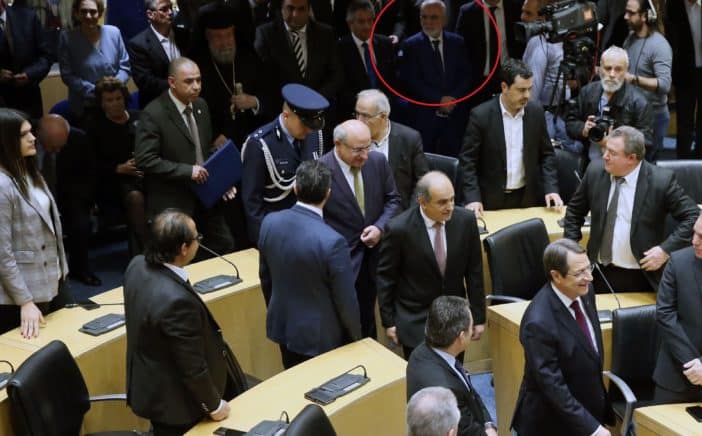 The owner of Paok Thessalonikis, tipped to buy a Church-controlled television station in Cyprus and who attended the president’s inauguration at the invitation of the archbishop, went onto the pitch apparently armed with a pistol to protest over a disallowed goal during a match on Sunday with another Greek team, AEK.

Russian-born Ivan Savvidis, one of Greece’s richest men, walked onto the pitch during an interruption in the match on Sunday night in Thessaloniki when referee Georgios Kominis disallowed a goal from Paok’s Fernando Varela in the 89th minute. Until then the match had been a goalless draw.

Savvidis, who was flanked by his bodyguards, wore a holster on his waist containing what appeared to be a revolver, though he did not remove it during the ensuing fracas.

AEK officials claimed Savvidis threatened the referee during his foray onto the pitch, before being pulled away.

The referee finally allowed the goal about two hours later.

“Such extreme phenomena call for bold decisions,” he said, without elaborating.

Savvidis was born in Georgia of Greek heritage and is a former member of the Russian parliament. He has holdings in assets ranging from Thessaloniki port to tobacco and media companies.

Reports had linked him with the possible acquisition of TVOne, the television channel owned by the Church of Cyprus, but nothing official has been made public.

Savvidis is not a newcomer to the mass media business. In August last year, he acquired around one-fifth of Greece’s Mega Channel from Greek businessman Fotis Bobolas for a consideration of €5m. Two months later, Savvidis sold his stake to Cyprus’s Elenovo Ltd, a company headquartered in the same building, which houses the Limassol-based law firm Andreas Sofocleous and Co. LLC.

In July 2017, Savvidi also acquired two Greek newspapers, Ethnos, including its Sunday edition, and Imerisia, plus their logos for a total of €3.6m.

The newspapers were also affiliated with the Bobolas family.