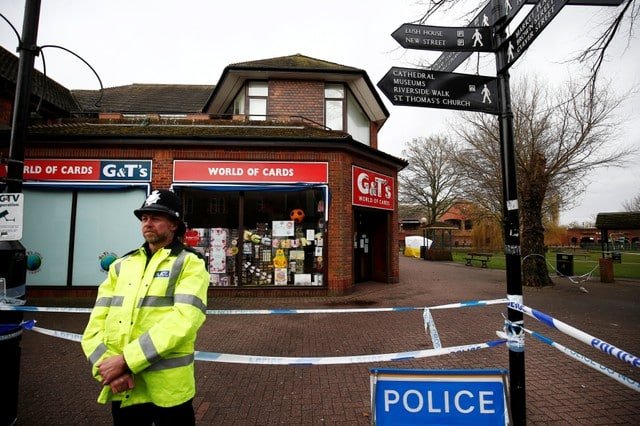 A police officer stands at a cordon around the bench where former Russian intelligence agent Sergei Skripal and his daughter Yulia were found after they were poisoned, in Salisbury

Prime Minister Theresa May will bring Britain’s parliament up to date on the investigation into a nerve agent attack on a former Russian spy on Monday, and one senior lawmaker expected her to point the finger of blame at Moscow.

Russian President Vladimir Putin brushed off a question about the affair while visiting a grain centre in Krasnodar, southern Russia, saying British authorities should first “get to the bottom of things,” the BBC’s Moscow correspondent wrote on Twitter.

Sergei Skripal, 66, and his daughter Yulia, 33, have been in hospital in a critical condition since March 4 when they were found unconscious on a bench outside a shopping centre in the southern English cathedral city of Salisbury.

May has warned that if Russia is behind the poisoning of Skripal, a former colonel in GRU military intelligence, then Britain will respond robustly. Russia has denied any involvement in the attack which also struck down a British policeman.

The chairman of the British parliament’s foreign affairs committee, Tom Tugendhat, said the attack looked like state-sponsored attempted murder and he thought May, who chaired a meeting of top ministers and security officials, would say Russia was responsible.

“Frankly I would be surprised if she did not point the finger at the Kremlin,” Tugendhat told BBC radio. May will address parliament at about 1700 GMT.

Even though Britain has not officially blamed Russia, the affair has driven already poor relations lower.

Asked by the BBC whether Russia was involved, Putin said: “We’re dealing with agriculture here…& you talk to me about some tragedies. Get to the bottom of things there, then we’ll discuss this”, the broadcaster’s Moscow correspondent tweeted.

Tugendhat said Russia’s so-called oligarchs, who have amassed fortunes during Putin’s 18-year rule, should be denied entry to the luxuries of London and the West.

The British capital has been dubbed “Londongrad” due to the large quantities of Russian money that have poured in since the collapse of the Soviet Union in 1991.

British counter-terrorism police say a nerve agent – usually a small molecule that interferes with the transmission of nerve signals – was used on Skripal and his daughter.

But they have refused to specify which poison was used. A British policeman who was one of the first to attend to the stricken spy was also affected by the nerve agent. He is now conscious in a serious but stable condition, police said.

In a broadcast on Sunday, Russian state TV suggested Britain itself had poisoned Skripal to upset the soccer World Cup which Russia is hosting in June and July.

“They tried to pin the blame on Russia, but if you think it through the poisoning of the GRU (military intelligence) colonel was only advantageous to the British,” Dmitry Kiselyov, the country’s top pro-Kremlin presenter said.

May last year said Putin was seeking to undermine the West and the international order by meddling in elections. She promised to ensure corrupt money does not flow into Britain from Russia.

“If we get to a position when we’re able to attribute this attack then we will do so and the government will deliver an appropriate response,” a spokesman for May said.

Putin, who took over as Kremlin chief from Boris Yeltsin on the last day of 1999, has denied allegations that Russia meddled in the 2016 U.S. presidential election and says the West has repeatedly tried to undermine Russian interests.

Kremlin spokesman Dmitry Peskov said Skripal worked for British intelligence and the attack happened in Britain so it was not a matter for the Russian government.

Skripal betrayed dozens of Russian agents to British intelligence before his arrest in Moscow in 2004. He was sentenced to 13 years in prison in 2006, and in 2010 was given refuge in Britain after being exchanged for Russian spies.

British Foreign Secretary Boris Johnson drew parallels between the poisoning of Skripal and the murder of former KGB agent Alexander Litvinenko, who died in London in 2006 after drinking green tea laced with radioactive polonium-210.

Man caught on CCTV having sex with sheep

Givenchy, tower of French fashion and tailor to the stars, dies at 91