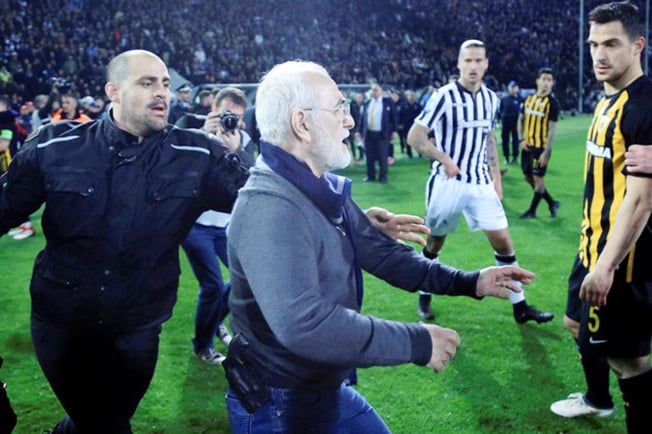 Greece’s top division on Tuesday opposed the suspension of all Superleague football fixtures over crowd trouble, saying it threatened the clubs’ very existence.

Greece had indefinitely suspended matches after the owner of the club PAOK Salonika, Ivan Savvides, was filmed wearing a gun holster as he strode onto the pitch to protest about a disallowed goal against AEK Athens on Sunday.

The game was abandoned and later awarded to PAOK following a controversial goal that had prompted the initial protests by PAOK officials. Savvides later apologised for his actions in a club statement on Tuesday.

“It creates a grave danger and we are possibly moving away from our aims and objectives.”

Stratos said he had asked for the “quickest possible resumption” of matches but no date had been yet decided.

The 58-year-old Savvides, still sought by police for questioning over unauthorised entry to a soccer pitch, said he had no intention of causing harm to anyone.

“I want to apologise to PAOK fans, to Greek fans and to the global football community,” he said in a club statement.

“I am sorry and I had no right to enter the pitch in such a way,” said Savvides. “I had no intention of clashing with anyone and I clearly did not threaten anyone.”

Savvides was born in Georgia of Greek heritage. He has holdings in assets ranging from Thessaloniki port to tobacco and media companies, many of them in northern Greece.

Greek football has been plagued by pitch invasions and violence on and off the pitch for years and authorities have repeatedly promised to clean up the game.

However, attendances have dwindled and this season only four clubs in the 16-team top division have posted average attendances of more than 5,000 spectators per league game.

PAOK boss Savvides, a former member of the Russian State Duma, was accompanied by bodyguards as he angrily walked onto the pitch at Thessaloniki twice, once wearing an overcoat, the second time with the coat off and his holster in plain view. He did not pull out a weapon.

PAOK were later awarded a 1-0 win after the referee reversed his decision two hours after the game and allowed the goal.